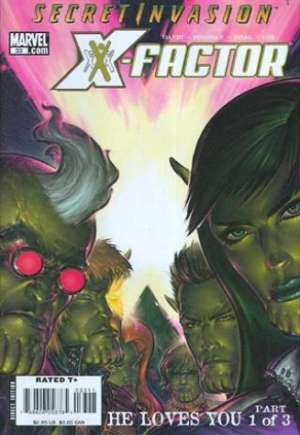 “He Loves You, Part 1: The Darwin Awards”

After their encounter with Arcade and the subsequent burning of Mutant Town, X-Factor has relocated to Detroit and renamed their business XF Investigations. They did so in part to get out from under the O*N*E* although this plan failed as Valerie Cooper tracked them down and made Jamie an offer he couldn’t refuse so to speak. No one else but Strong Guy knows of this, least of all Siryn who is now 5 months pregnant with Jamie’s baby as we have flashed forward a bit.

Darwin, the Evolving Boy, also happens to be in Detroit with Longshot looking for Professor Xavier, whom Longshot wants to help more than anything, as he always has. Longshot promises he can help, though his luck powers have been off a bit lately. To test them, he picks a fight with some thugs who instead turn on Darwin. The thug tried to drown Darwin in a gushing fire hydrant, though he develops gills to survive. He also tries to cut his neck, but it turns to rubber. He also develops speed to escape the situation.

Back at the newly named XF Investigations, Darwin’s father (who used to be a drunk and was driven away by Darwin’s mother, since she claimed it was his fault he was a mutant) has tracked his son to Detroit, but needs some “special” help finding him, something he has found X-Factor can be quite good at. Valerie Cooper has the place bugged and listens to their business. Monet recognizes the name as belonging to Darwin so the mutants can’t help but take the case for one of their own.

After Darwin escapes, the thugs turn on Longshot. They dogpile him but are then surprised to find he was not there when they landed. He retreats to an alley, reverting to his true form: that of a Skrull. During all of this, Jazinda (a good Skrull, and She-Hulk’s current partner) has been tracking this fake Longhost. Seeing his transformation, she realizes her suspicion was correct. She is spotted later by the fake Longshot and makes a run for it, though she is tripped up by Darwin who still thinks Longshot is the real deal. Jazinda fights back but is quickly taken down by Monet who has shown up. This doesn’t bold well for her, as another newcomer is at the scene… the savage She-Hulk!

I liked this issue, but it was very confusing. I don’t get why this Skrull led Darwin to Detroit in the first place. Was he tracking X-Factor and needed to use Darwin, or was it something else? How did Jazinda and She-Hulk find out about the Skrull and why are they tracking it? A lot of questions to be answered and it looks like I’m going to have to get the next issue of She-Hulk to find out… I was also a bit taken back by the art. After a while I got used to it, but Stroman’s long necks and bird-like mouths are a bit much at first. The writing is still fantastic though. Peter David really knows these characters and really makes them work together. Excellent stuff.