From the Venerable Vaults of Marveldom, it's the Mighty Marvel Handbook - 1980's style! Just what is the 1980s Handbook, you ask? Imagine a Handbook written at 11:59 p.m. Dec. 31, 1989. The profiles within cover everything published by the hallowed House of Ideas up until that point. So if it's from a comic that has a December 1989 cover date or earlier, you'll find it in this magnificent mag! Featuring 1980s takes on the Avengers, Captain Marvel, the Defenders, the Fantastic Four, Iron Man, She-Hulk, Spider-Man, Thor and Wolverine - plus U.S. Archer, Captain Hero, the Crossroads, Crystar, DP7, Fusion, Hercules of the 24th century, Lady Daemon, Lunatik, Necromon, Nightmask, Nuke, Rocket Raccoon, Spaceknights, Spider-Ham, Micah Synn, Zaniac and more!
by Marvel Comics 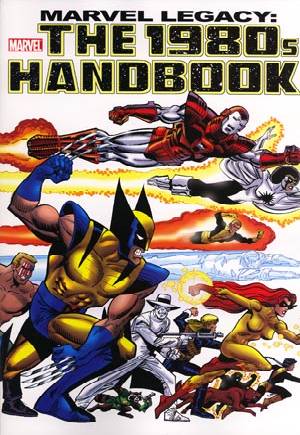 This issue hasn't been tagged.
Be the first to add to the gallery.