In the wake of Messiah CompleX, there are no X-Men and young mutants Rockslide, Blindfold and Dust are alone and directionless. Until the day Cyclops recruits them to hunt the new incarnation of the Brotherhood - and kill them. Joined by a pair of new recruits, the young X-Men learn a hard truth about the world post-Messiah CompleX: sometimes old allies make for deadly enemies.
by Marvel Comics

Young X-Men is basically going to replace the New X-Men title in the wake of Messiah Complex, which to be honest I am a bit upset about since New X-Men had pretty much been my favorite X-title for a while now. Rockslide, Dust and Blindfold will continue to be a large part of the story with Wolf Cub making the jump from supporting character to team member. There are also two new mutants (how they can keep introducing new mutants after Decimation, I really don't know), one named Greymalkin who has not been introduced and whose powers are unknown and the other named Ink, who somehow is granted powers when he gets tattoos. In this issue he gets a bio-hazard sign which can make anyone he touches sick. He already has an explosion on his left arm and some kind of webbed pattern on his left forearm. It is assumed he could put wings on his back and be able to fly, among other things. Pretty cool characters, I'd say.

Anyway, this issue basically just sets things up for the direction of the series. It begins in a dream sequence where Blindfold sees a currently non-existent team of X-Men battling the X-Men's old foe Donald Pierce, who ends up killing one of the young mutants though it does not show which. She believes she can change this outcome and gets ready to leave her aunt's house and return to Xavier's. Elsewhere, Wolf Cub is in Germany visiting Maximus Lobo for revenge, Maximus having tried to kidnap the boy a while back to train him as part of his "Dominant Species" in which he believes the wolf-like mutants are the true evolution of the species. Maximus is now depowered and luckily Cyclops shows up to stop Wolf Cub from doing anything he'll regret, telling the boy if he wants somebody to hurt, he'll point him at the "right targets."

In Afghanistan, Dust is busy protecting small villages from the Taliban when again Cyclops shows up and recruits her. At the Xavier Institute (which is destroyed), Blindfold finds no traces of her friends, but is followed by a shadowy figure (most likely Greymalkin). In California, the boy known as Ink is getting his Bio-Hazard tattoo I mentioned above and tests it out on a cop there to arrest him. In jail, Cyclops shows up and breaks him out, disguised as a police officer. In Florida, Rockslide and Blindfold are having lunch as Blindfold explains the dream she had. Rockslide asks how they are supposed to find the other mutants from her dream, to which she replies, "look to your right" where Cyclops has been sitting the entire time. He scolds Rockslide for not noticing and asks him to join the team, though he refuses to go unless Blindfold is included, considering the scope of the dream she had.

Inside the Danger Cave, Cyclops explains to the team (sans Greymalkin) that their first target is a group of mutants who have banded together as a new Brootherhood of Evil Mutants, though the team is comprised of Cannonball, Magma, Sunspot and Moonstar... some of the original New Mutants of the 80's. Why exactly they are now calling themselves Evil is a mystery and frankly Cannonball was a good guy just the week before during Messiah Complex, so this is a very strange turn of events.

This issue makes me thing Cyclops is a Skrull. Not because of the secret Skrull cover where it shows him a bit Skrully, but because of how violent he has become. First he puts together the new X-Force team and flat-out condones killing, now he is putting together a new team of younger mutants who he feels he can "point" at certain "targets." Sounds fishy to me. The line-up is alright. The new guy Ink should be cool, but I'm not a big Wolf Cub fan. Have to see what exactly Greymalkin can do but his appearance isn't anything special. He's grey, we get it. The art is pretty good, but again nothing special. Pretty much indifferent on that front. Fairly weak opening issue and not a lot of team dynamic yet, but we'll see where it goes.

Note: Cover score is based on normal shipping cover only. 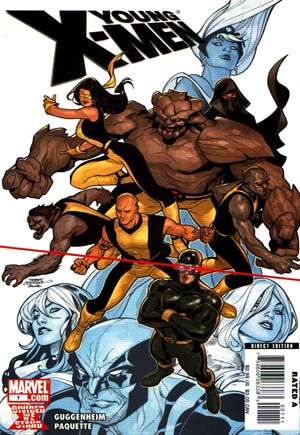 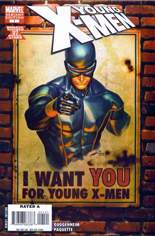 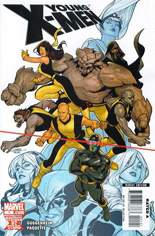 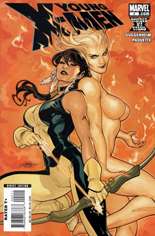