The first year of the Initiative comes to a dramatic close as members are laid to rest, drummed out, declared AWOL, or...awarded their full Hero's License. See who graduates and find out what super-teams they'll be assigned to as the NEXT era of the Initiative begins! Plus: as a new 3-D MAN appears, the base is suddenly short one Skrull...but not how you'd think...

"Changing of the Guard"

Avengers: The Initiative has probably been the best series released by Marvel with the exception of Captain America.  As the first class of this series evolved, so has this book in terms of story and art.  This  issue sees the first graduating class of Stamford, Connecticut while taking a step backwards.  This isn't a bad issue, just disappointing after the epic "KIA" arc.

The book starts with members of the first graduating class-Cloud 9, Hardball, Komodo- and Gauntlet preparing for Trauma's funeral.  Gyrich, War Machine, and "Yellowjacket" preparing for a hearing from Iron Man, Ms Marvel, Valerie Cooper, and Senator Woodman(Superhuman Armed forces?).  Meanwhile Taskmaster and his Initiative class visit Dragonlord's family of his untimely demise.  Fans of Taskmaster and Ant-Man will get a real kick out of this scene.

We then returns to the Camp Hammond funeral where Trauma turns out to be less dead than most people thought; the subtle humor in this scene is uncanny.  We then find Nighthawk handing purple hearts to those injured in the KIA arc including Constrictor and the very Skrully Crusader.  The scene with this Skrull is sort of anti-climatic in way, since it explains how Skrulls have remain undetected so far.  The book would have been better without it.

The book then goes back to the Hearing room where Gyrich continues to refute questions and allegations.  People familiar with the Alberto Gonzales case will find all elements of this conversation hilarious.  The committee then has Ultragirl explain the aftermath of the last KIA fight, including Iron Man letting the New New Warriors run away.  Iron Man's patience with Gyrich then comes to a stop where he kicks him off of the Initiative program through a quirky series of events.  Afterwards, Iron Man unveils the new graduating class from Camp Hammond in their mostly brand new costumes.  After being assigned their new locations, we have a scene that is strangely eerie with Cloud 9 and her new "job".

Wow.  This is a lot to deal with in a regular sized book.  Thankfully, Slott and Gage balance all parts of these stories very well, with only a few awkwardly placed scenes.  The subtle humor continues with quirky stuff from Ant-Man, Taskmaster, Gyrich, and Slapstick.  I hate to see Slott come in and out of this book in the near future, hopefully Gage will handle the new upcoming class until his permanent return.  The art is a mixed bag of reviews.  Steve Uy is NOTHING like Stefano Casselli, but he gets the job done for the Most part. 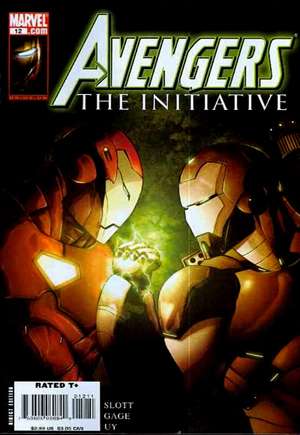 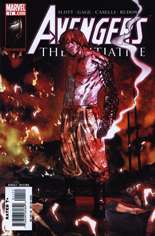 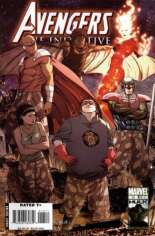