Continuing "Batman R.I.P," the epic story that will change the legend of the Dark Knight forever! As the life of Bruce Wayne takes an interesting turn with Jezebel Jet, the life of Batman falls into the ultimate downward spiral.
by DC Comics

"Batman in the Underworld"

I don't think Batman has ever had a writer that challenged his own mythos as Grant Morrison has done in the last few years.  In a matter of months, Morrison has gone back and re-established certain parts of Batman's history in ways we never could have imagined.  Batman #677 is no different.  During his run, Batman has gained a son we thought was out of continuity, gained three villains made to think and act like him, learned of a villain that has possibly been controlling his life since he first started fighting crime, and has had his mind re-established and rejuvenated in questionable ways.  In the second issue of the storyline, Batman: R.I.P, we finally get to see some of these parts close in on our favorite Dark Knight in fantastic and amazing ways.

The issue starts with Batman questioning a punk/criminal about the Black Glove to no avail.  After returning to the Batcave and pondering the mystery of the Black glove with Alfred, we see Doctor Hurt and his brand new League of Villains form their plan of taking down Batman and learn more of the Black Glove's understanding of Batman's mind.  Batman is then showing his new lady friend, Jezebel Jet, the Batcave and we begin to see Jet's questioning of what Bruce Wayne has done with his life.

After learning of a supposed scandal involving Bruce Wayne's parents and Alfred, we continue to see Jet question Batman about the existence of the Black Glove, even planting the possibility that he is the Black Glove himself.  With that in mind, Bruce looks at the monitor on his computer and begins to hallucinate and has a mental breakdown.  Before we can learn more, Batman faints and the villains begin the offensive, burning Wayne Manor and preying on poor Alfred.

The art in this book just grows on me more and more as I keep re-reading this book.  Tony Daniel is an excellent artist with a perfect blend of character detail and surrounding environments.  The real highlight for him in this issue is when he draws the scenes between Jezebel and Batman in the Batcave, with one page featuring an angled look at Batman standing beneath his cave that will burned into my memory for a long time.

Overall, Batman: R.I.P is proving to be a great blend of Grant Morrison style writing and story with some excellent art to back it up.  I have never seen a writer mess with such an iconic character's mind so much and run with the story so well. 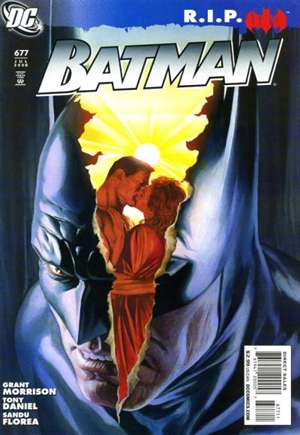 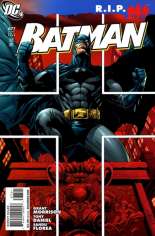 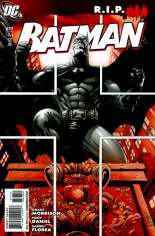 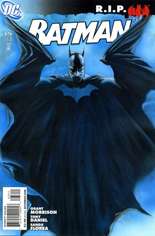 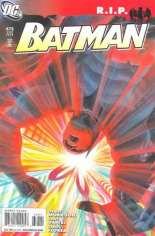