Batman's mysterious adversary has won. All is lost for the Dark Knight. Bruce Wayne is now deranged and dissociated, wandering homeless in the alleys of Gotham City. Is there a chance that Bruce can rebuild his Batman identity from scratch, or is this truly the end for one of the world's finest heroes?
by DC Comics

The last issue of Batman left the caped crusader in quite a pickle.  He begins to have doubts of what's he's done for most of his life now, has a complete mental breakdown, has his mansion attacked and his butler beaten, his special casebook missing, and Nightwing is nowhere to be found.  The third issue of this storyline acts as a transition phase as we move on to the final half of the storyline.  Sadly enough, the end product feels slightly mellow dramatic and very, very weird.  Especially for those not steeped in DC universe history like myself.

The story begins with Robin (Tim Drake) reading up on Batman's early days, referring to things Morrison has already established such as Batman's days in isolation to understand the insane mind.  Robin is soon disrupted by members of the new Club of Villains and escapes on his motorbike.  With no transition, we then find a hobo finding Bruce Wayne doped up in the garbage.  The hobo is introduced as Honor Jackson.  Bruce then needs help to stand and has strange flashbacks to when Doctor Hurt storms the batcave, injecting him with heroin and crystal meth.

Suddenly, once again, we find Nightwing facing off in an abandoned train yard fighting other members of the Club of Villains.  Robin soon contacts him and wants to meet him at one of their checkpoints.  Before they can say anything else, both Robin and Nightwing have more villains to fight off and break communication.  Back with Hero and Bruce, journeying across the city, and run into some thugs.  Bruce fights them off and the two run away before anything else goes down.  Afterwards, Honor gives Bruce his most prized possessions and tells him they need to move on through the city.  Honor then tells Bruce where to go once his head is clear and takes him to the port for a view of the city.  Before anything else happens, Honor disappears from right beside Bruce.  Bruce then decides to follow Honor's advice and soon learns that Honor really died the day before.  Before anything else makes sense, he realizes where he is:  Park Row, Crime Alley.

We then find Robin waiting for Nightwing at their checkpoint, but Nightwing never shows.  In Arkham, two doctors are discussing their newest arrival: One of the Club of Villains' members, as he starts foaming at the mouth in his cell.  Two more things to note before the end of the issue: Doctor Hurt steals one of the costumes on display in the batcave, making it his own costume and Bruce Wayne makes himself a costume based on the Batman of Zur En Arrh, an old alternate universe from WAY back if I've been informed correctly.

In classic Grant Morrison fashion, the story has quickly become very convoluted in many ways, while some parts feel like they've been added for no particular reason.  This IS a tranistion from the begining to the climax, but this issue feels like a bit of a letdown compared to the first two issues.  However, Tony Daniel's art redeems this issue's wackiness in a few ways.  Many of his images are fun to look at despite the craziness of it all(The last page in particular) while Alex Ross turns in another solid cover. 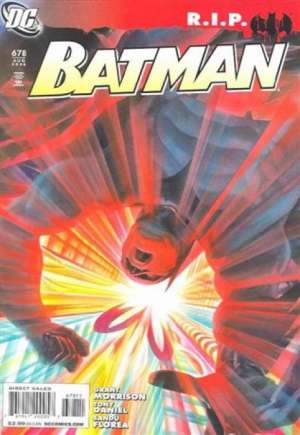 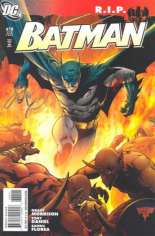 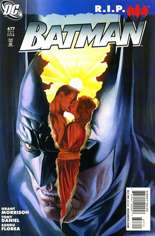 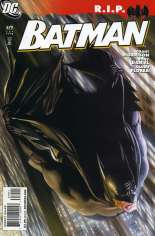