Where does a young boy turn when his whole world suddenly disappears? What could change two brothers from an unstoppable team into a pair of bitterly estranged loners? How does the work of one middle-aged nurse reveal the scars of an entire community, and can anything heal the wounds caused by a century of deception?

Critically-acclaimed cartoonist Jeff Lemire pays tribute to his roots with Essex County, an award-winning trilogy of graphic novels set in an imaginary version of the Ontario county where he was born. In Essex County, Lemire crafts an intimate study of one community through the years, and a tender meditation on family, memory, grief, secrets, and reconciliation. With the lush, expressive inking of a young artist at the height of his powers, Lemire draws us in and sets us free.

This new edition collects the complete Essex County trilogy (Tales from the Farm, Ghost Stories, and The Country Nurse) in one deluxe volume! Also included are over 50 pages of previously unpublished material, including sketches, promotional art, and two new stories.
by Top Shelf

Being Canadian I find there's a shortage of truly Canadian stories in comics. Well, that's not completely honest. Canada's low population density being spread out so thinly along the border means that my Canadian experience on the Atlantic coast can differ greatly from someone living in British Columbia or Manitoba where the climate, literal and cultural is significantly different. Add to that the fact that Canada has two official languages (which creates its own set of issues) and an unfortunately neglected aboriginal people and one begins to understand the difficulty of defining the Canadian experience.

Essex County however, struck a chord with me and accurately describes a specific slice of Canadiana. The story takes place in rural Ontario, spanning nearly a century of complex family history. It follows the lineage of Lester the young loner who's absent father and mother's death has caused him to escape to the fantasy world of comic books - much to his uncle's dismay and confusion. Creator Jeff Lemire captures the essence (from my perspective) of something uniquely Canadian. His lingering panels precisely express the not-quite-tranquil and feeling of damn near isolation inherent to east coast winters - an

effect amplified by the inky black and white line work. Lemire also demonstrates the jarring seasonal transitions and their impact on the psyche. Always present of course is the background of hockey culture, regardless of one's interest level in the sport. But ultimately it is a chronicle of the entanglement of family.

I identify with Lester's search for identity within the limping agricultural lifestyle. I recognize his uncle's confusion but good intent, and the weighty responsibility of caring for his deceased sister's child. I am almost uncomfortably familiar with the overall tone of this book and Lester's quiet disorientation if not with the core subject of the book.

From a purely technical point of view, this trilogy is very well constructed with just the right amount of time spent on each character and their story. Flashbacks are used not to fill holes but to enrich characters. All dialog is believable and not only for it's distinctly Canadian quirks. The pacing is perfectly poised. But all that academic stuff is simply frosting on the cake - or gravy on the poutine so to speak. The true appeal of this book is it's charm and unceremonial charisma. Though I have not lost a parent to death and my family is somewhat nuclear in nature, there is still something in this book I intensely connect with. Something... well, something Canadian I suppose.

If you're curious about what a Canadian experience can be like, I'd say Essex County is a good place to start.

___
Essex County is being adapted to film. Read about it here.

A sweetly endearing collection of vignettes about growing up Canadian. 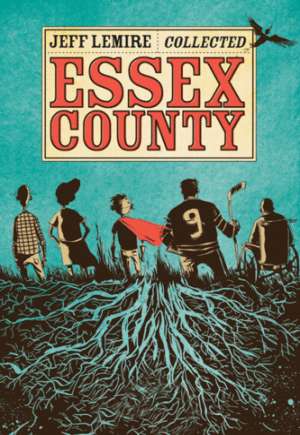 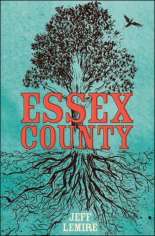