I love how this book starts out. “Peter Parker is Spider-Man. Matt Murdock is Daredevil. New York is the city both call home. The story that follows is but one night in their lives…” The team up of Spider-Man and Daredevil has always been a favorite of mine. These two characters really mesh well together. Not only are they both excellent crime fighters in their own rights, but they both have grown close enough to each other as friends to reveal the biggest secret each of them have, which is their secret identities. You don’t do that for just anybody. That speaks volumes to me as far as comics are concerned. Which takes me back to the opening line of this issue. In such a big city, it seems like most of the heroes only meet up to battle the Skrulls, or a rampaging Hulk, or themselves in a Civil War. In this issue, however, we get to see Spidey and Daredevil hook up for a night of good ol’ crime fighting.

We start with a news announcement of a little girl that had been kidnapped during broad daylight. Police have no information, save for a crude ransom note that was left behind. Lucky for us, Matt Murdock is eating his lunch when he hears the news. Ask for the check, change into the superhero duds, go to the crime scene. DD does what he does best. He uses his senses to investigate. Daredevil is now on the case. Page turn to Spidey… Where do we find everyone’s favorite Web Head? Slinging through the city, on patrol – let me just say that I love Spidey banter and if a writer can bring it out correctly, instead of making him sound like a very bad comedian, it really makes for some great reading. 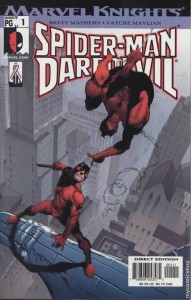 OK, back to the issue at hand, so to speak. Spidey is on patrol, hilarity ensues, you get the idea. With both of our title characters introduced, the issue moves forward. I really liked the way this issue flows. On one hand we have Daredevil, who is legitimately investigating and trying to find this little girl. He scours the city for information. He finds, questions, and beats up bad guys all in the pursuit of rescuing that kidnapped 6 year old. On the other hand we have Spider-Man web slinging through New York on patrol. He goes through his regular night as well stopping purse snatchers, robbers, and a rather painful event with a distressed cat. All the while, their paths are soon to cross but not like it usually does in comics.

Brett Matthews really wrote a good story here. Believe it or not my favorite part was the fact the Spidey and DD don’t even see each other until the end of the issue! It really made a lot of sense and it just felt right. Spidey and Daredevil are written very well here. They don’t sound two-dimensional but are not excessively serious either. Spidey is very upbeat while Daredevil is very involved. The whole narrative is smooth and well paced.

I had never seen Vatche Mavlian’s artwork before this but let me tell you it is very pleasing to the eye. His style reminds me slightly of McFarlane but not as detailed. I really liked the way Spidey and Daredevil were drawn here. It’s issues like this that really keep me reading comics.

Great stories, with great artwork keep the reader hooked and turning each page for more. It’s not filled with explosions on every page or invasions of aliens or sea creatures or anything like that. This feels more down to earth more grounded, believable – in a comic sort of way. That to me, is what it’s all about. When you turn that last page, set the book down, and say to yourself, “Now that was a great issue.”

You can buy this comic book at a low price by clicking here.