It’s the first New Comic Book Day of May and just a few days until Free Comic Book Day. Whether you’re a complete newbie or just someone looking to try something different, this week has some fine selections in Comics for Noobs! First up Black Bat #1! 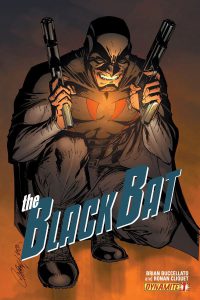 Tony Quinn has his mind set on revenge and the ability to deliver. Once an attorney, and now a “blind” vigilante, Quinn aims to clean up his city through a bit of violence and detective work with his alter-ego the Black Bat. For his first move, he sets his sights on Marcos “The Brute” Bruno.

After taking some questionable cases as an attorney and having them backfire, Tony Quinn is both disgraced and disfigured. He has nothing left to lose, but through some mysterious help, he gains some “creepy bat eyes” and has a mission. He aims to clean up his city, even if it may be too far gone already. He plans on working his way through the various crime bosses and starts with the biggest set of muscles on the street, The Brute. While things don’t go quite according to plan, he wins the battle and proves, mostly to himself, that he is no real hero.

This issue acts as a great origin story. You get to know Tony a bit, find out why he’s turned to crimefighting, but you’re kept in the dark enough to wonder about him. Brian Buccellato takes what could’ve been a rather formulaic character and gives him some actual personality and depth. There is a great sense of tragedy to Tony and I look forward to seeing more of it. The art by Ronan Cliquet works great for the story. The action sequences look fantastic and the characters are very expressive. My only gripe is that the character makes me think of Batman a bit too much. The real line that did it was when Tony called the city an asylum and the inhabitants patients. Though likely unintentional, it was an immediate connection in my mind.

Overall, it’s a great way to jump into the character. A good origin story and it’s done right. New readers, check it out. 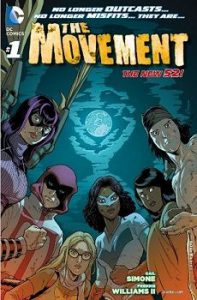 The Movement #1 published by DC Comics

A group known only as “The Movement” takes over a piece of Coral City and begins to police it as their own little kingdom. With their superpowers and unique agenda, they plan on making a change in their world.

Some crooked cops are caught in the act by the hacker group Channel M. It’s amongst the fallout from this that a hunt for a serial killer develops and both the cops and The Movement end up at a church where a young boy is seemingly possessed. It’s only after a showdown between the police and The Movement that it’s declared that the group now claims part of Coral City as their own. They’ll take care of it, free of any outside interference.

Gail Simone has won me over. She’s taken a new team of characters and a risky concept and made a first issue that I enjoyed. Though it’s unsure where the series will head, I’m along for the ride for a while, just because of this issue. The art by Freddie William II is seemingly standard “superhero style” but has a certain energy and feel to it that sets it apart. It’s a great meeting of writing and art.

It’s a great first issue in a new series and one that is sure to please many readers. It does a good job of setting up some serious conflict. While we still know basically nothing about our characters, the concept and presentation is strong enough to warrant picking up the second issue. 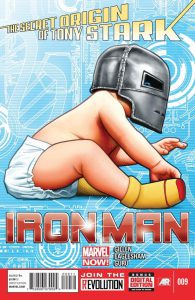 With an arc titled “The Secret Origin of Tony Stark“, there should be big things in store for Iron Man. When Tony isn’t guarding the galaxy, he’s apparently hiring robot space bounty hunters to find evil robots. Such is a day in the life of Iron Man.

After parting ways with Star-Lord, Tony seeks out the bounty hunter known as Death’s Head, a thirty-foot tall robot. Tony wants help tracking down the 451, a robot that has caused massive destruction. After a bit of payment and a bit of travel, Tony and DH arrive at the ship they suspect 451 is aboard. It’s only after a bit of double-crossing and some forceful negotiations, that Tony is shown something that could put a whole new spin on his past.

Kieron Gillen is writing a story that is definitely interesting. The aspect of a planet called Hope’s Pustule and a three-story tall robot bounty hunter is a bit hilarious, but works well for this story. It’s this mix of odd and serious story that makes this issue work. The art by Dale Eaglesham is quite great too. The towering, almost comical Death’s Head looks great in all his robotic glory. Plus, that new Iron Man armor looks darn snazzy.

This arc promises a change or two, so it’s worth reading. It’s not the most new reader friendly, but I think it could still work. 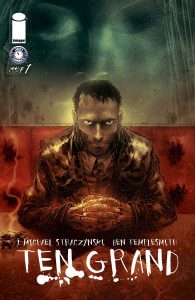 In a love story unlike any other, Joe will do anything to see his dead wife again, even for just five minutes. He routinely dies in painful ways while serving the bidding of Heaven, and if his death is righteous enough, Joe gets to see his beloved Laura again for five minutes.

Joe walks into Lenny’s bar to await anyone seeking his special services. When a young woman arrives to hire him, he finds that the target is a man he thought long dead, and one he has a personal history with. It’s then that we learn of how Joe came to be in the situation he’s in. While working as an enforcer, he was told to kill a man, whom he was told was also an enforcer. What he found was something much more. What followed claimed both the life of Joe and his wife. It was only through a deal with Heaven that Joe was able to escape Hell and see his wife again, even for just five minutes. With each righteous and painful death, Joe rejoins Laura for just five minutes before being put back to work by Heaven.

J. Michael Straczynski writes an interesting story of Heaven, Hell, and the one man that will do anything for love. It’s a love in the most tragic sense, but also a supernatural mystery book too. It’s a mix that’s not often seen, but one that should be seen more often. The art by Ben Templesmith fits the story perfectly. The dark and slightly loose style seems right in this story where an angel appears in a strip club and a man resurrects over and over again. The story and art come together to make something wholly enjoyable.

New readers, get on this! It’s a new miniseries, with no ties to preexisting work, so there is nothing to research. It’s just a great story perfect for anyone to jump into.

Review: Chew #26 Tony Chu is a cop. A cop with a weird power. He's cibopathic, which means that when he eats something,…