Arguably one of the biggest hits from Image Comics in the last year, Five Ghosts: The Haunting of Fabian Gray from Frank J. Barbiere and Chris Mooneyham follows treasure hunter and thief Fabian Gray as he travels the world searching for the secret of the five literary “ghosts” that possess him. Along the way, Fabian uses the powers of the five ghosts (The Archer, The Samurai, The Wizard, The Detective, and The Vampire) and discovers that there is much more to his powers and the world than he originally thought. The first trade recently collected the five issues that made up the original limited series, and after getting upgraded to an ongoing, issue six hits shelves on October 30th.

After a successful heist, Fabian gets to know the client a little better, only to leave for London. While there, Fabian experiences another episode in which his five “ghosts” leave him nearly lifeless for multiple days. After a letter from an old friend, Fabian embarks to Africa with his friend Sebastian, only to experience another episode and come close to dying. It’s only with help of a mysterious man that Fabian is saved and taken to the Orient, where he learns the true origins of his powers and must combat a great villain, even while a greater evil looks on. 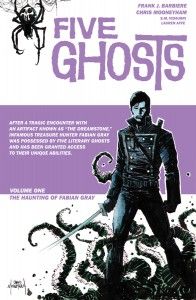 Frank Barbiere rightly deserves to have Five Ghosts upgraded to an ongoing series, and I hope to see it continue to publish for many months to come. Barbiere takes great pulp roots and incorporates some solid literary illusions and interesting story elements into something that was a truly engaging story and quite unlike anything else on shelves. The pulp aspect alone made it worth a read, as there are too few pulp comics out today, but Fabian and the other characters were written quite well, showing their personalities and fears on the page.

Chris Mooneyham’s art is powerful and emotive. While the big panels and splash pages really show the force of expression that Mooneyham is able to put into his art, it’s the little things, the small facial expressions and little details, that really make the book work. With a book full of battles and monsters and supernatural happenings, there are bound to be grimaces and pained screams, and Mooneyham captures the anguish and pain in these things extremely well. The design of some of the more exotic locales and creatures is superb too. Everything from African tribesmen riding giant spiders to mysterious mountain monasteries all look amazing when Mooneyham draws them. The coloring work from Lauren Affe and S.M. Vidaurri really made Mooneyham’s work leap from the page, especially in the more supernatural scenes as the colors set the tone nicely.

The trade is a great way to read the story, as it gets the entire initial struggle of Fabian and his demons, both personal and otherwise, in one nice little volume. The inclusion of the Ben Templesmith variant covers for each issue is a nice treat to those who bought only the standard covers or bought the book digitally, and they act as great pinups before each story.

Five Ghosts is a great story, either in trade or single issues and is definitely a story to watch out for. Great concept, great writing, and great art all came together to make one of the best modern pulp stories. Anyone interested should catch up with the story by picking up the trade and then picking up issue six when it hits shelves at the end of the month.

Advance Review: The Standard #2 The opening lines of the first issue sums up The Standard best. "This is the story of a hero, and…