So by now I’m sure you have heard all about the Marvel NOW! news. For those of you who haven’t heard, you are lucky. I wish I could forget about what Marvel Comics is going to do. Better yet, I wish I could convince them not to go ahead with it. If you really want to know what they have planned, read on. If you want to continues unawares of what they are gonna do, click the back button…NOW!

Marvel NOW! is not a reboot according to Marvel’s Chief Creative Officer, Joe Quesada. As he said in IGN’s interview, it’s just a “reconfiguration.” So what does that mean exactly? Well Marvel is going to be scrapping a handful of titles to make way for the launch of a handful of other titles (feels like they just did this). What titles are they dropping you ask? Nine titles are getting the axe, and those are: Captain America, Fantastic Four, FF, Incredible Hulk, Invincible Iron Man, New Mutants, The Mighty Thor, Uncanny X-Men, and X-Men: Legacy. And so far they’ve announced three titles that will take the place of those: Uncanny Avengers, All-New X-Men, and Avengers (whaa?). 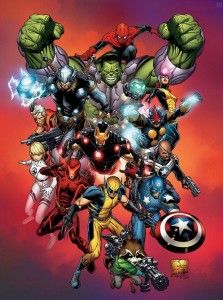 First off, I may be totally off since I don’t read anything Marvel puts out except for X-Men related titles (ton of those too), but aren’t there already a multitude of Avengers titles? (If I’m wrong, let me know in the comments). I get it. People love the Avengers, especially since the movie, but is there anyone in the 616 who isn’t an Avenger now? Part of what made being an Avenger so special was it was a tough team to get on to. You had to be perfect and be able to function on a team. I see the Justice League the same way. Being a part of the Justice League, or Avengers, is a big deal and when every hero in their respective worlds is a member or reserve member, it cheapens being a member.

I know in Quesada’s interview he said they want to, “keep our characters as consistent as possible, so that when somebody who decides to delve into the world of comics from experiencing the movie at least gets an experience that is similar to what they saw on the big screen.” Now look at the image to the right, aside from changing Cap’s costume to better reflect his movie costume and inserting a black Nick Fury into the 616 (more on this in a bit), no one there looks like their movie counterpart. Hulk has armor…for whatever reason. Thor looks similar, but a bit different. Iron Man’s armor is a completely different look and color. The most egregious change, at least for me, is Cyclops. Not only does his costume look completely different, but they got rid of his visor. Instead of his trademark visor he now has a helmet with an “X” on it (clever!), but the “X” crosses not in front of his eyes, but his nose. I don’t know, maybe I’m just being cynical, but if you say you want to keep your characters consistent with the movies, maybe you shouldn’t be changing the look of the characters.

I will say, they have attempted to bridge the gap by creating a black Nick Fury character so the moviegoers who liked Samuel L. Jackson won’t be surprised to not see him in regular Marvel comics. It’s been pointed out to me that he is most likely a character named Marcus Johnson AKA Nick Fury, Jr. Oh. Right. So Nick Fury just happened to have a son who looks incredibly like the Ultimate Nick Fury, and his son just happens to need an eye patch over the same eye just like his pops. This folks is what they call pandering. 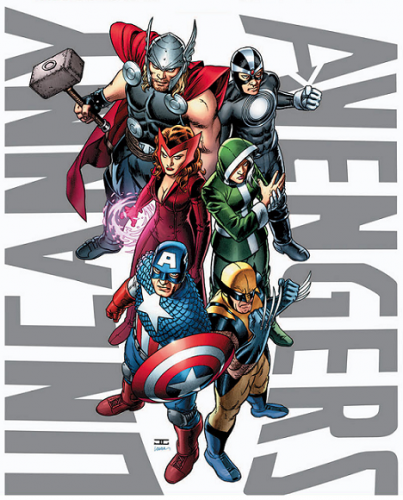 Look, I get the fact that they want to stay at the forefront of the comic market, but it’s like they saw all the success DC had with their ‘New 52′ and wanted to do something kinda like that. DC’s reboot was so successful because they went all in, for the most part. But, Marvel seems to be going about it a bit halfway. They want to reap the same kind of success DC had, but they don’t want to make the same kind of changes. And frankly, they don’t need to.

Marvel is going to be coming off not only a commercial success, with Avengers vs. X-Men, but also a success from fan’s point of view. Fan reactions of this event has been high, sales have been even higher, so I’m puzzled as to why Marvel is doing this. In fact, I hope when they were pitching this idea around Marvel, someone there asked, “why now?” This “reconfiguration” feels a little unnecessary in the wake of everything they have going on. And while I’m talking about it, Marvel needs to use AvX as a comparison for it’s future big events (you know it’s gonna continue). AvX has been so well received because this feels like a progression in it’s stories. This event has been a couple years in the making, so it feels like a more natural story, unlike when they spring the premise on you out of nowhere.

As my good friend Tom Hoefner has said about comic companies, “they should focus less on the next big event, and more on just writing good stories.” Time will tell, but Marvel NOW! feels more like the former, and less like the latter…at least to me (even if that is a pretty slick cover).

Avengers Movie Figures Hot of the presses of Marvel.com! That's right people we have The Avengers Movie figures on your way to your…