What if superheroes were real? And what if one day they all disappeared? In DANGER CLUB, a new Image Comics series by Landry Walker and Eric Jones, the fate of the world is in the hands of the allies that the heroes left behind — their teenage sidekicks. It’s up to the this rag-tag and fragmented group to battle the immense cosmic evil that threatens the world. But the fight could be over before it even starts if the sidekicks’ struggle for dominance destroys them from the inside. 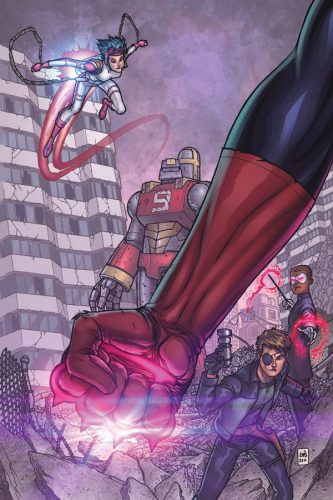 “Eric and I wanted to take they typical assortment of sidekicks and strip them of their authority figures,” explained Walker. “These are the most powerful beings on the planet, and the oldest is around sixteen. You take any group of teenagers and put them in a positions of absolute power… there will be some serious consequences. Some will seek to recreate the familiar hierarchy or attempt to establish their dominance while some will some will rise to the occasion.”

Walker and Jones are no strangers to superheroes. However, the creative team behind Supergirl: Cosmic Adventures in the 8th Grade and Batman: The Brave and the Bold, still feel like they’ve undertaken something new.

“The flexibility of working within our own superhero universe has been a rewarding experience,” said Walker. “It’s a very different animal — independent creation versus working within corporate-owned playgrounds — and it’s allowing Eric and I to show sides of our work that we really haven’t been given an opportunity to expose while working under a corporate umbrella. We’ve kind of gotten a label as ‘all-ages’ creators. That’s not all we are. Fortunately, Image has given us an opportunity to show our range and diversity.”

DANGER CLUB #1 will be in stores and digital platforms on April 4 and is available for preorder in the February issue of Previews. A three-page preview appears in INVINCIBLE #89, in stores on February 29.

Advance Review: Danger Club #1 Something is taking place just outside the reaches of earth. Every super powered human that can go, does, leaving behind…