I have been anxiously awaiting for this issue to come out.  When I read the Review capsule for Daredevil #1 I almost didn’t pick it up.  When my brother came home however, he had a copy of the first issue in his hands.  About an hour later, he came up to me and put the comic in my hand. “Read this.”  He says. 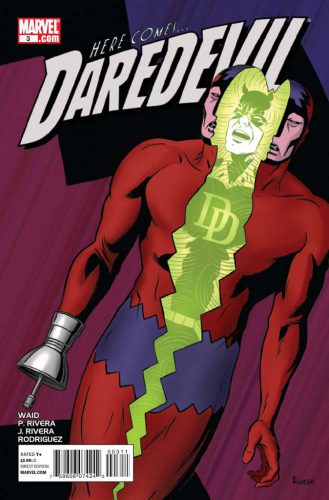 We start right where issue 2 left us. Daredevil is trapped in some crudely built machine while creatures made from pure sound work diligently around him.  What are they doing and more importantly, what could they possibly want Daredevil for?  That’s answered soon enough as The Man Without Fear picks out a genuine heartbeat down there with him.  No. Wait… it’s irregular.  Lacking rhythm.  Who is it?  It’s none other than Ulysses Klaw.  He’s a secondary villan for the Fantastic Four but I know him better as Doctor Doom’s right hand during the Secret Wars.

To be honest with you, I was expecting something a little more epic than Klaw.  Sure, Klaw is kinda cool but after reading the first two issues and the awesomeness that came from those, this kind of let me down.  Now, I really enjoyed the parts that dealt with Foggy Nelson more so than the parts with Daredevil, but I felt cheated there too. Through the entire issue it just seemed rushed. It seemed like they were just trying to tighten it up and finish it quickly so they could go on to something else.

As for the art?  Paolo Rivera has become one of my new favorites.  I really hope he sticks with Daredevil for quite a few issues as his pencils perfectly detail Waid’s words.

The end of the book has something very special.  Marvel took an excerpt from their original works “Heroes” and “A Moment of Silence” for the tenth anniversary of the attacks on September 11th.  We get a well crafted image from Joe Quesada of a faceless Firefighter holding a folded American flag.  Following that is a short, but no less powerful tale called “Moment of Truth”.  What you next read in bold is taken from the opening lines of that story:

“Anthony and Phaedra Savas have lived in the city of New York all their lives.  Astoria, Queens has been their home since 1965.  All three of their children live and work nearby.   Their son John works at the Federal Reserve bank, their daughter Sandra works at Tiffany & Co., and their daughter Tina at Marvel Comics.  Tony is 72 years old.  For 15 years, Tony has been a building inspector for the Port Authority.  He has seen the never-ending construction and renovation that is the city-within-a-city known as the World Trade Center.”

To me, it’s very powerful that Marvel would share that story with us.

Daredevil #3 doesn’t deliver the excitement that the other two issues brought to us.  It didn’t get the same attention the other two issues got and it just felt rushed.  Well good.  The arc is over.  Bring on something that has some meat and potatoes to it!  Lets see Murdock really work the Daredevil and Lawyer angles together!  C’mon Marvel, don’t let me down.

StashMyComics.com is a free comics cataloging software solution for organizing your comic book collection. Sign up here for a free account to start tracking your comics collection in less than a minute, completely free.