Wolverine as a Headmaster?  Where have I been?  Last I knew, he was the best there is at what he does, and what he does isn’t very nice.  That still seems to be the case (as in current issues of X-Force) but by day, he is a legit teacher… of English Lit! Wow! Take a seat at the front of the class people as we learn about Wolverine and the X-Men #4! 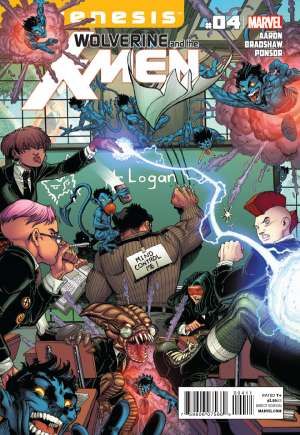 So, within the first three issues, the institute has been destroyed and rebuilt.  Issue #4 starts with Wolverine giving us a recap of sorts.  By day, he is Professor Logan.  He has an office and a desk and his name on the door.  He teaches English Lit to the next generation of mutants.  By night, he is Wolverine – a member of X-Force – a team that does what needs to be done by any means necessary.  We come in to the middle of a staff meeting as such X-Men as Beast, Shadowcat, Iceman, Rachel Grey, and Logan go over the goings-on of the school.  There is some neat chatter here as they discuss students and the like. After this conversation is over, it shifts gears to a regular day in class.  I know it may not sound like much, but trust me, it’s not as dry as I describe it.

Jason Aaron masterfully crafts a very full story here.  Though it doesn’t feature tons of action and suspense, it’s nice to read a cool down issue from time to time for a chance to meet the characters of the story.  Broo, a student who just so happens to be part of the alien race of Brood, turned out to be one of my favorite characters in this issue.  In no way, shape, or form id he typical Brood.  Brood are bloodthirsty insect like creatures that are very ruthless foes of the X-Men. But here one sits, full of joy and spunk, not to mention genius intellect.  It’s just the way the characters are written that gives them the personality required for a story like this.  No one person is dull or generic.  They all feel like they have a life of their own.  In a school full of unique individuals, I’m glad a writer can tackle something like this while avoiding two dimensional clichés.

Now for the art. I have to say that I was rather impressed by Nick Bradshaw.  The cover of this issue does not do the interior art any sort of justice.  To appreciate the script, you have to see how Nick puts it to pencils.  I’m almost reminded of an animated movie on paper, but that doesn’t quite describe Bradshaw’s art.  It’s full, it’s fluid and it has consistency.  You know how some artists draw the characters in a general way, staying near to the concept of the character but not exactly consistent with each panel?  You don’t see that here.  Bradshaw has taken the time to make sure the character’s facial features stay the same throughout the issue.  I find that to be an achievement in and of itself.  I found the issue to be visually striking overall.

I honestly did not expect much from this.  Once again, I’m proven so wrong.  I enjoyed sitting down and taking the time to read this, to soak in the artwork, to feel the story.  I actually laughed out loud at the pinkish see-thru kid with a paper stuck to his hand.   And how about that shocker at the end? Wow! I’m adding this to my pull list, and I hope both Jason Aaron and Nick Bradshaw stick with this title for at lest the first 12 issues.  Anything either of these two touch though is bound to be good.  Grab it from your LCS, take a load off, and ENJOY an issue!

Review – Wolverine and the X-Men #1 Schism has ended and the teams have been chosen. Wolverine and his team of X-Men have left Utopia and traveled…