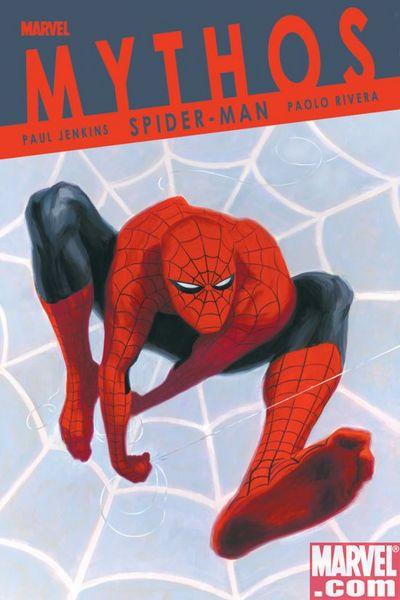 Sometimes, during the course of a character’s history, the origins need to be retold.  Usually it’s to freshen it up a little bit.  Make it look nice and shiny for the new people that have come along that don’t really have a grasp on what the character is really all about.  Sometimes we need to be told why these characters fight for what they believe in or why they fight against the status quo. Such is the case with Mythos.

Mythos was a project by Paul Jenkins and Paolo Rivera that would help to bridge the gap between the comics and the adaptations to film that have been flooding the silver screen.  The whole point was to introduce new  readers who had little to no knowledge of the comic histories – which, as you and I both know can be quite a bit to take in sometimes – and bring them into the fold.  There were several of these put out but we’ll focus on this one here.

Everyone should know the origins of our favorite Web-Head by now  but if you don’t this book will definitely help you with that.  Narrated by good ol’ Peter Parker himself, we start right at the beginning. Taking place in current times, Peter is this nerdy kid (who most of us were, or we knew someone like it) that nobody liked, especially girls.  He was invisible except when people like Flash Thompson needed someone to pick on.  The panels go quickly to the loving home of Ben and May Parker, Peter’s Aunt and Uncle.  It’s during this time that Uncle Ben has that famous conversation with Peter.  “With great power, comes great responsibility.”  Oh if Peter only knew how much those words would change his life.  But he doesn’t.  He does take those words to heart though.  He’ll need them later.

Moving forward we go to the Science Fair where the fateful happens.  Peter gets bit by the radioactive spider, and as the spider’s venom starts to go though his body, his powers start to emerge.  Fleeing from the Science Fair in pain, he nearly gets hit by a car.  His powers save him, however, as he instinctively jumps and clings to the wall of a nearby building. Like any teenager in their right mind, Peter goes out and enjoys his new abilities.  Let’s not forget the invention of the web shooters.  He climbs, he sticks to walls, he jumps, he let’s his spider sense tingle, but must of all like any red blooded American he uses his new found powers to earn some cold, hard cash.  On the Conan O’Brian show no less.

I like that update to the history.  What better place for him to showcase his powers than on late night television!  Could you imagine the buzz about that the next morning?  You better believe that would be the only thing on the news!  Peter doesn’t care about that though, he just wants the cash. Which he gets. He also gains an attitude. When he’s needed to stop a petty thief, he doesn’t.  Instead he let’s said thief go by and when he’s confronted with it, tells the cop “Hey, it’s not my problem.”  Oh, how fate deals it’s hand.

We all know what happens next.  Uncle Ben becomes the victim of a fatal robbery. Peter finds out about it as he’s coming home.  On the police radio, he hears the location of the robber.  As Spider-Man he goes to enact revenge. The words Uncle Ben spoke to him day before will  ring true here, as those very words will save Peter’s soul.  “With great power, comes great responsibility.”  Instead of killing the robber, which he very well could have, he hands him over to police.  The book ends as quickly as it started.  “And that’s the way it goes.  Boy slips up, somebody dies.  Boy wonders if he’ll ever find his feet again.  You know the rest of the story.”  I love that ending.

Paul Jenkins wrote an amazing story.  The dialogue really brings out the feelings and emotions of the characters.  The story flows very well and hits all the major points in the origin.  Paolo Rivera’s art is a masterpiece.  I fell it has a little bit of Alex Ross influence in it but he definitely makes it his own.

Now, I’ve read Spidey origins before, but nothing quite like this.  I used to be that nerdy kid in school, and I could definitely relate to Peter Parker.  That’s what Stan Lee wanted though.  He wanted characters that were real, that had real flaws.  They made mistakes.  Peter fits that bill very well.  This issue does it’s job very well also.  It takes you down the road of the origin of Spider-Man.  You watch Peter grow from the simple teenage boy he is, to the hero he ultimately must become.

To buy this comic book at a discounted price click here.

Review: Harbinger #1 Before I begin my review I want to make it known that I am a complete Valiant noob. I have never…