In July 2012 I came across a Kickstarter project for a comic book called The Mighty Titan. The premise of the book opened my eyes up to the potential that crowd funding has in communicating a positive message through the medium. For creator and writer Joe Martino, it would be telling the story of his survival over cancer, through the perspective of a superhero. Assisted by artist Luca Cicchitti, issue #1 has since been successfully funded, completed and can now be purchased at jgmcomics.com.

How does Mighty Titan fare out of the gate? Issue one starts off steady, giving a taste of the world Joe has built while at the same time not overwhelming us with information. Our main characters are introduced briefly, and by the end Joe shows us he’s not afraid to buck tradition by giving us a surprise. I’m hopeful, based on that final reveal, that getting to know the characters in the world of Mighty Titan will keep us all on our toes and remain far from predictable. 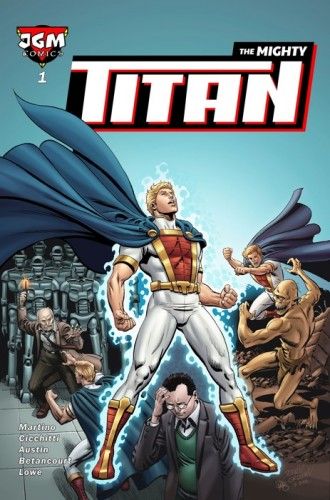 Cicchitti’s art is comfortable in the superhero genre. I appreciate the fact that Luca’s style does not fall victim to the trends of over exaggerated muscles or women who could double as contortionists trying to show off their womanly assets. Other stand outs are the detailed background work and facial features of all the characters, something that works to communicate the emotion of Joe’s words. Everything feels natural and each page stands out as something unique to look at.

So where’s the cancer?! That’s the question Joe poses at the end of this issue, and he promises it’s something that will come to the surface as the story develops. Some of what the character of Mighty Titan will go through will correspond directly to some of the experiences that the writer himself has had. The fact that Titan is being written straight from the the heart of Martino himself will make this a powerful story that will touch many who have been through a similar plight.

The Mighty Titan for me has kicked off a whole catalogue of what I perceive as “positive comics.” Books like GrayHaven’s You Are Not Alone, Shira Frimer’s Nistar and Greysoul’s Read-to-Me Comics were all created by those who want to bring a heartfelt and positive message to their readers. In a world where tragedy, war and disaster appears to run rampant, I for one don’t want to see the trend of positive comics stop.

Where does this series go from here? That all depends on the support of the readers of Mighty Titan. Issue one was a big success, and now Joe and the team are gearing up to Kickstart issue #2. If you want to prevent yourself from missing out on that opportunity, you can visit Joe’s website (link above), follow The Mighty Titan on Facebook or Joe Martino on Twitter (@jgmcomics). Issue two will feature art by Jamal Igle on the cover, so don’t miss out on the Kickstarter, launching on May 27th, 2013!

You can usually find me writing about crowd funded comics right here at StashMyComics.com! Keep up with the latest spotlighted projects by following me on Twitter @ChipReece.

Check out the graphic novel I’m writing, METAPHASE – Inspired by my son and other little heroes with Down syndrome. A 10 page preview is now available for FREE on ComiXology from Alterna Comics with art by Kelly Williams! Please read and rate!

Where’d You Get That!? Finding Crowdfunded Comics… As the popularity of crowd funded comic books continues to grow it's likely you've seen someone talk about a comic they…

Crowd Funding Flash: Final Boss Comic Project Sam Maiden is back after successfully funding issue one of Reboot, and carrying on the tradition of featuring artists with…