Just over a year after their big reemergence, and Valiant shows no signs of slowing down. Their titles have all been of high quality, with a range of creators helping to shape the Valiant Universe once again. After a stellar run by Justin Jordan and Patrick Zircher on Shadowman, Valiant’s voodoo hero gets a special Halloween one-shot from Jim Zub and Miguel Sepulveda, complete with a special variant cover with a cut-out Shadowman mask. 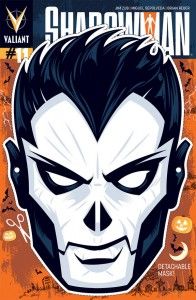 It’s Halloween in New Orleans, but things are anything but festive for Jack Boniface. He’s been out all night as Shadowman and now his landlord’s locked him out of his apartment and his phone is dead. But with all the celebration by the humans, it only makes sense that some spirits want to get into some trouble too. So, Jack must deal with some possessed frat boys, demon pugs, fan girls and more as another night in the Big Easy comes and goes.

Jim Zub is well-know for his work on Skullkickers and the Pathfinder series from Dynamite, and it’s great to see him getting more work in other universes. While not quite as light-hearted as Skullkickers, there’s a bit of Zub’s humor in this issue, along with a great sense of storytelling and world building. He keeps the familiar tone from Jordan’s run on the title, but also puts some of his own touches on the character. As someone who’s lived less than two hours from New Orleans for several years and visited many times, the way Zub has it described is pretty spot on. There’s always a party in New Orleans, even more so on Halloween or Mardi Gras, and it makes it a city a bit different from all the rest.

Sepulveda’s art is well-suited for the book, being a bit darker and using shadows well. His designs on the spirits and the possessed pug are completely amazing, really helping to firmly remind the reader that Jack Boniface deals with some strange things in his daily life and these things are always pretty. The way Sepulveda depicts the crowd scenes, packed full of (likely drunk) people and bright colors, again helps to make the New Orleans depicted in the book seem more real, as during certain times of the year it’s hard to even see your feet walking down a New Orleans street.

Though it’s a bit of a departure from the main storyline of the series so far, this is a fun issue. It’s a good “done in one” type story and really gives a good idea of who Jack is and just what sort of city New Orleans is. I don’t even really want to call it a fill-in issue because it doesn’t seem like a fill in issue, due to the quality of the story and art. Plus, there’s a pretty cool mask if you get the variant cover.