There are some times when you get your hands on a graphic novel, not the ones that are collections of issues one through six of a storyline, but a real one, one that is intended to pull you into its world for  a hundred or so pages and hold you tight until it’s time for it to let you go.  This story that I just finished reading for the second time… well, only one word can really describe it.

I have never read anything quite like this, and I don’t know if I ever will.  This has to be, without a doubt, the best story I’ve ever read.  If you have never read this, I strongly urge you to look for a copy at your local comic shop or find one online and fall down the rabbit hole like I did.  Sit with me for a few minutes as I give you my review of Brian Azzarello’s Joker. 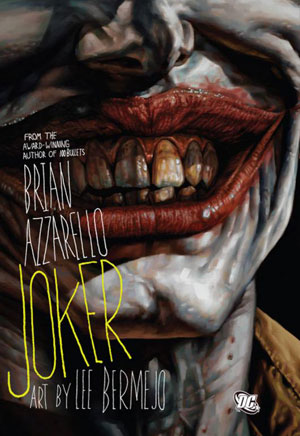 The story starts off with an amazing three panel pan going into the inner streets of Gotham City. Without the hows or whys,  the Joker is being released from Arkham.  During his time away, all of his assets in the city, everything he had “worked” so hard to get was gone.  Divied up between the mid level crime bosses and some of the bigger ones too.  Someone has to go pick him up, but none of the Joker’s former goons want to do it. Johnny Frost does, and so starts our story.

The entire story is told through the eyes of Jonny Frost, someone who you don’t know his name yet, but by the end, you do.  Jonny wants to be a part of the big time, to have the power, the respect, to be feared.  With Joker, he gets more than he bargains for.  We get to watch as the Joker systematically goes from one person to the next, taking back what’s his.  The way it’s done is superb, and we get to see nearly all of Batman’s rogues gallery too.  Killer Croc, though not as a reptilian type creature but more of a gigantic black man with a skin condition, The Riddler as some sort of Pimp/Thief, and let us not forget the Penguin and Two-Face.  They’re all here, and it all fits in nicely.

The story that Brian Azzarello crafted is astounding.  His words are few on the pages, but the story that he tells is very deep.  I’ve never read any of his work for 100 Bullets, but after this, I’ve got to.  The story did not lag anywhere, it kept it’s pace and held me tight as it took me on this gory and violent ride.  Harley Quinn as a stripper?  Then she strips the skin off a guy?  You can almost see how Joker find that funny.  Through Brian’s words, you see all sides of Joker, again through the eyes of Johnny Frost.  You really do get a glimpse at what insanity could be as you read this, and that in part is what makes this story so amazing.

Let us not forget the art though.  If Brian Azarello’s words are what drives the story, then Lee Bermejo’s art is what makes it go faster.  The Riddler asks a question of the Joker:  “When the world is against you, where’s the safest place to hide?”  At the end of the scene, the Joker finally answers him:  “You know the safest place to hide, is in sanity.”  The look on Joker’s face in the reflection of the glass is enough to send chills down your spine.  It almost felt like Joker were staring at me as he said that.  If artwork can do that to me on the pages of a comic… that my dear readers is incredible.

I picked this up on a whim at a bookstore a few months ago and I couldn’t wait to get home and read it.  When I did, I was blown away.  I had a few friends read it too, and I think it’s safe to say that the reaction they gave to it was the same.  It’s a crime drama, definitely with a noir feel to it.  It’s gritty, dirty, gory, violent, and in some parts sad.  As Johnny goes through the life of the Joker, he realizes, albeit to late for him, that this is a place he never wanted to be.  What’s amazing about this is we never see Batman until the very end, but he’s there, oh yes he is, and the Joker reminds us of that through the story.  There is fear when the Bat is mentioned, but his hatred and anger definitely outweigh that.

This is a story that anyone must read.  If you’re not a fan of comics, this is a great place to start.  You can see just how amazing of a medium it is to tell a stoy like this.  Seen through the eyes of a nobody, you will be taken on a ride that will make your head spin from moving so fast, but when you’re done… you may just want to get back in line to do it all over again.

Back Issue Bin to the Future: Marvels #2 Without a doubt, I think Marvels is one of the best titles to come out of the '90's. Sure, it…