Even with all the Saga controversy, there are many, many great comics out this week. But what would be right for a new reader? Below a mix of new series, new arcs, mainstream, and indie that might just be the right comic to get started with. First up, Theremin #1! 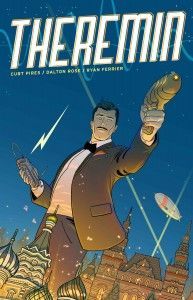 Leon Theremin was a Russian inventor in the early 1900s who invented the theremin, one of the first electronic instruments. This is where the comic takes over. In the world imagined by Curt Pires and Dalton Rose, Theremin’s instrument has strange and amazing powers when a certain frequency is struck. It’s these powers that take Theremin from being a brilliant scientist/inventor to a time-traveling spy. The issue is digital only right now, and is published through MonkeyBrain on Comixology for just $0.99.

Pires and Rose strike a great balance of action, scifi, and alternate history to make this quick-paced story one that makes the reader want more, but not feel let down. Rose’s slick art makes Theremin look like James Bond with time travel, which fits the tone of the story well. Even with all the scifi, the story feels almost plausible because of the authentic feeling dialogue and characters. It’s a fun mix of strange and simple that makes this issue a great read.

For new readers, this is perfect. It’s cheap, well-written, easy to find, great looking, and a fantastic comic. If you have a smartphone, you can get this comic. It’s great stuff with a strange, wonderful future in store. 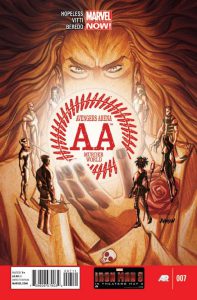 When various Avengers sidekicks and students are forced to square off in a Hunger Games style deathmatch, Avengers Arena is the result. This issue is a one shot after the end of the first arc in issue six, and details how Arcade, the villain of the series came to be in such a state of power. There’s violence, spurned affection, character development, and more as we see how Arcade came to be as strong as a god in his new version of Murderworld.

Dennis Hopeless and Alessandro Vitti make a legitimately interesting “origin” story for an admittedly B-list villain. Arcade is constantly beaten even when he has all the tricks, so it’s interesting seeing the little things that make Arcade who he is and ultimately lead to his latest plot. The art is stunning and the writing is fun, which makes for a great interlude issue before the next arc.

Issue 7 acts as a great introduction to the series, really. A new reader could conceivably pick up this issue and then go back and read the first six and have a clearer picture of the series as a whole. This issue answers a lot of the questions that previous issues have raised, but a new reader would merely wonder what Arcade was up to. Overall, a great issue for readers new and old. 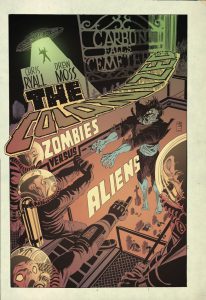 When aliens crash into a secessionist camp and reanimate the dead, things get crazy. In Colonized, the settlement of Carbon Falls gets much more than expected after the funeral of their leader. Aliens crash land, the dead rise, and the humans have to deal with both all while dealing with their own problems.

Chris Ryall and Drew Moss make a scifi story that doesn’t feel like it. Even though there are aliens and zombies, the real conflict is within the group of humans in Carbon Falls and they must deal with new leadership. It’s this blend of authentic conflict with a chaotic backdrop and art that perfectly captures both the normal and surreal that makes this issue something special. While aliens and zombies are a big part of this, I feel that they’re not necessarily the point, though that remains to be seen.

It’s a new miniseries and at just four issues, there isn’t much investment on the readers part. It’s well worth the time and money. I think a new reader interested in science fiction would feel right at home picking up Colonized and likely picking up the next three issues too. 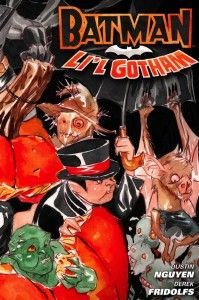 Li’l Gotham is Dustin Nguyen’s take on some fun, non-canon, holiday themed stories set within Gotham City. Though previously just digital releases around the time of the holidays, the first two Li’l Gotham stories, Halloween and Thanksgiving, are now in print. So get ready for a cute, colorful look at the world of Batman through Bruce teaching Damien about Halloween and the Penguin commanding an army of turkeys.

Dustin Nguyen hit on something fantastic when these stories were conceived. Along with Derek Fridolfs, Nguyen makes some instantly endearing stories that show a lighter side to the usually serious tone that Batman stories tend to have. The wonderful art that’s full of bright colors and incredibly adorable characters is at odds with the seriousness that Batman is usually treated with, but for these stories it works so well. While it’s not canon, it should be because Bruce and the Bat family could use some more family dinners and turkey armies.

The novelty of the issue alone could make new readers pick it up. Anyone not expecting a super serious Batman story will likely instantly fall in love with it, and it’s sure to make new readers happy. It’s a perfect example of the great things that a creator can do when given some room to work with an established property in unique ways.