With SDCC ramping into full gear, those of us not lucky enough to be at the show are left with our new comics to take solace in. So, let’s take a look at this week’s Comics for Noobs! 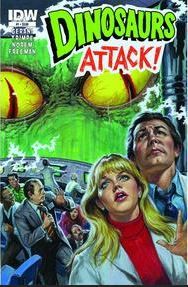 Drawing inspiration from the old school monster movies like Godzilla, Dinosaurs Attack revolves around Elias Thorne, the world’s most brilliant scientist, and his ex-wife Helen Chambers, Elias’ biggest rival. With his latest invention, Elias is hoping the change the world, but he really might destroy it instead!

Elias Thorne is a modern-day Einstein, creating inventions that benefit the whole of mankind. His newest invention is capable of peering into the past of a celestial body by bombarding it with special particles. While it has the potential to benefit science and rewrite history, Helen is wary of Elias’ new invention and is protesting against it. With both of them, and many politicians and reporters, on the space station equipped to fire the special particle at Earth, things go not quite as planned, but the ray is fired at Earth anyway. The result is one that no one was quite expecting. In Elias’ quest to better the world, he may just destroy it!

The influence of the monster movies of yesteryear is obvious, and it works as a comic in this vein. It feels a bit “dated”, as it intentionally does so, and that doesn’t necessarily work against it. For new readers, this may not be ideal, as those unfamiliar with the trading card series that spawned this comic may not like it too much. Even as a solid work, the older feel and the unfamiliar characters might turn some readers off. 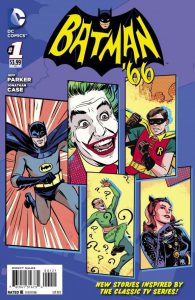 Inspired by the 1960’s Batman television show starring Adam West and Burt, Batman ’66 takes a goofier spin on Batman. In their first adventure, Batman and Robin must solve the clues of the Riddler and even receive a bit of help from Catwoman!

While attending a ceremony for the Gotham PD, Batman and Robin must spring into action after Riddler steals some priceless art. It’s only setting his own plane on fire and parachuting to safety that Riddler is able to get away. Deciphering the clue left behind, Batman and Robin head to a nightclub owned by none other than Catwoman! After a fight and an explosion, Catwoman teams up with the dynamic duo to take down the Riddler.

This is a welcome departure from the grim and gritty Batman that seems to be the only Batman we get these days. This goofy Batman with Batman sleeping gas and poles labeled “Batman” and “Robin” leading to the Batcave is something that modern comic readers have never really experienced. It’s nice to see something that’s more fun than it is serious, and drawing inspiration from the television show is a great way to do it.

New readers can enjoy this book. Batman, of course, is one of the best known comic characters and seeing him in a fun, silly adventure is something that is likely to draw some people in. 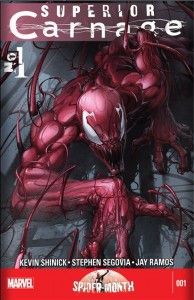 Ted Connelly is a white-collar criminal who somehow ended up in a maximum security prison full of supervillains because of prison overcrowding. Even with all the superpowered baddies that he shares a building with, Kletus Kasady is still the one he’s most afraid of. Even though Kasady’s in a coma, there’s something evil that Ted senses lurking there. It’s only after one of the guards is seemingly mind-controlled and opens Carnage’s cell that things really start to get bad. No longer is Ted different from the other inmates, as now they’re all doing the same thing: running for their lives. As Carnage kills the other inmates, he seeks out the one who freed him.

Carnage is a character who was absent for many years, but is always in an interesting story. Carnage has no redeeming qualities. Even before he was a supervillain, he was a serial killer. He’s a truly evil character, but that’s likely what makes reading about him so fun. For new readers, it may be a bit confusing. There are details that reference previous appearances of Carnage, which new readers will likely be confused about. Even so, it’s worth a read. 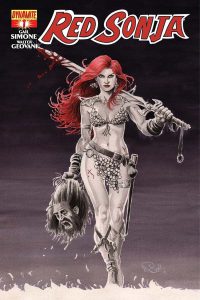 Red Sonja is everyone’s favorite barbarian warrior woman. As Gail Simone takes over the series, she retails the origins of Red Sonja. First found in a dungeon and released through and act of kindness, Sonja goes on to become a renowned warrior.

After being released from the dungeon, Sonja lives her life as a mercenary, only to be ambushed by some bandits as she sleeps. Drunk, she still manages to easily take care of the bandits. Two young girls escort her back to their kingdom, where she was freed from a season ago. The king is asking Sonja to train his people to be warriors, as an army approaches to destroy their city.

The story was one that was easy for a reader to get into, but it wasn’t a particularly captivating one. The story seemed dull, but the art was great. Certain lines of dialogue really felt off or just straight-up weird. For example, when one of the young girls calls Sonja “she of the excellent cleavage”, it just feels oh so wrong and strange. This odd feeling caused by the awkward lines of dialogue detracts from the overall impact of the story and leaves me just confused a bit.

New readers, take caution. While it’s a tale that is fairly easy to get into with no prior knowledge, it might not be your cup of tea. While some of the things I perceived as odd might be things that are common in Red Sonja books, it’s just too much for this reader.

Back Issue Bin to the Future: Batman (Vol. 1) #196 Last year, I had the opportunity to go to my first comic convention here in Knoxville, TN.  It wasn't anything…