Are you a Daredevil fanatic? Well, you might want to put this in your reading queue! The Devil is in the Details is a new book from the Sequart Research & Literacy Organization edited by Ryan K. Lindsay (not endorsed by Marvel) that collects essays that explore a variety of concepts related to everyone’s favorite hornhead. Look for the book to release sometime early this year! Is your interest peaked? Here’s some more info regarding the essays collected from the press release:

“‘Daredevil’s Origin’ by Will Murray discusses how Marvel came to publish a character named Daredevil.

‘Daredevil: Not Ready for Primetime?’ by M.S. Wilson discusses how Daredevil works better as a character on his own rather than integrated with others. 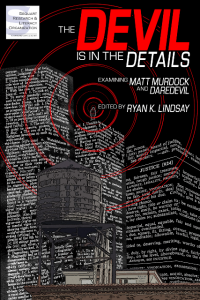 ‘Daredevil and the Missing Father’ by Forrest Helvie delves into the concept of fatherhood in Daredevil’s creation.

‘Grabbing the Devil by the Horns’ by Matt Duarte looks at the early rogues of Daredevil’s crime fighting days.

‘Being Mike Murdock’ by Tim Callahan is an interesting take on the imaginary brother Mike Murdock.

‘The Life and Times of Foggy Nelson’ by Christine Hanefalk deconstructs the life of Matt Murdock’s best friend.

‘When Things Fall Apart in Hell’s Kitchen: Postcolonialism in Bendis’s Daredevil’ by Jon Cormier is an educational look at the role the location plays in the book.

‘There Will be Blood: Daredevil’s Violent Tendencies’ by Henry Northmore considers the effects of Daredevil’s violent adversaries.

‘Daredevil: Intermediate Superhero Film Making’ by Geoff Klock is a discussion about the 2003 movie adaptation.

‘What Fall From Grace? Reappraising the Chichester Years’ by Julian Darius looks over the much maligned Chichester run from the 90s.

‘Daredevil and Punisher: Polar Opposites? ‘ by M.S. Wilson investigates the themes connecting Daredevil and the Punisher.

‘.22 Caliber, A Girl’s Gun: Vanessa Fisk & Freedom of Action’ by Kevin Thurman discusses the role of Vanessa Fisk in the Bendis/Maleev run of the 2000s.

‘The Only Way Is Down – Brubaker’s Saga as 70s Cinematic Noir’ by Ryan K Lindsay analyses the Brubaker/Lark/Gaudiano run against the cinematic noir cornerstones of the 70s.

A variety of topics and approaches are presented in this book. This is a creation all about Daredevil by people who love Daredevil.

Our mission is twofold. First, we promote research into comics-related topics, publishing books, producing documentary films, and maintaining online resources that encourage comics scholarship. Second, we promote comics literacy by promoting the medium and encouraging others to experience the unique artform known as comic books.

They have published books about Watchmen, the Legion of Super-Heroes, the Batman and X-Men films, as well as producing documentaries about Grant Morrison, Warren Ellis, Chris Claremont, and the Image founders.

Ryan K Lindsay is a writer of comics and about comics. He has had words featured in comics from IDW, Marvel, Action Lab, ComixTribe, and Challenger Comics, as well as published non-fiction with CBR, Sequart, and Crime Factory.

For more details or information please contact Ryan K. Lindsay, he can be reach on:

What are some of your favorite Daredevil stories and concepts? Does a book like this interest you? Let us know in the comments below!