This is going to be a kind-of-but-not-totally-spoiler-filled semi-review of Lost.

Why just a semi-review? Because I’m only done with five seasons. Why kind-of-but-not-totally-spoiler-filled? Because it’s impossible to spoil Lost totally, even if you’ve seen the whole thing.

Because there’s so much of it that the creators didn’t bother explaining themselves, anyway. 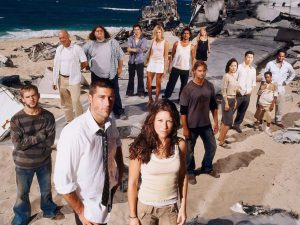 But I did go on and splurge for a Netflix streaming account, primarily so I could watch full runs of a decent number of the TV shows that I’ve missed, and decent shows, at that. (If you have Netflix streaming because you want to watch the ‘movies’ offered on it, I shed a tear for your soul.) My first show was Arrested Development. Splendid and, because it had a criminally short run, very easy to complete. Next I tried Madmen. Three episodes in and I had no interest. Done. Then, I took a deep breath and dove into Lost, a show that I long ago determined I was going to read in trade, and about which many of my friends and colleagues, people whose opinions on storytelling I trust explicitly, had long been shouting at me:

If you’ve watched Lost… you know. If you HAVEN’T watched Lost, you will know, because I’m now assigning this week’s homework: watch Lost. If you HAVE watched Lost and you DON’T know… then I suppose you just don’t like fun.

I can not fathom how anyone watched Lost during its initial run without going insane with anticipation. It is more of a page-turner show than any I have ever experienced. I’ve seen daylight after a night of watching episode after episode, because at the end of just about every single one I end up hissing under my breath (it’s usually very late) something like “THIS F***ING SHOW!” and pressing the little virtual button that implores the red-screened god of Netflix to start buffering up the next one. 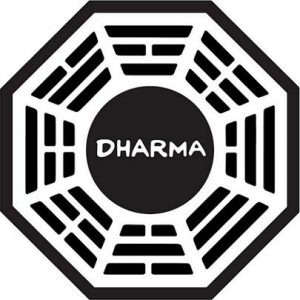 There’s some honest-to-goddamn genius going on up in here, questions upon questions upon more questions, and like any good science experiment (Dharma Initiative plug!) every slow and meticulous answer received only leads to more questions: what’s rustling the trees? Who is that woman speaking French in the transmission? Where’d the extra passenger come from? What ‘others’? What do those numbers mean? Kate did WHAT?! How come this guy can walk now? WHAT THE HELL IS THAT BLACK SMOKE THING?! Wait, the tail end landed safely? Why are they dragging that teddy bear through the brush? Sawyer’s a dick. Holy crap, why is there a DOOR in the middle of the jungle floor?! Is the French lady holed up out there crazy? Why does Jack’s dad just keep showing up everywhere? Wait, there’s ANOTHER guy locked IN the hatch? Holy hell, WHAT’S THAT CHINESE SCIENTIST TALKING ABOUT IN THE CREEPY-ASS FILM STRIP?! What happens if they don’t push the button? What are those symbols that flipped up on the timer? WHAT IS THAT DIAGRAM ON THE WALL IN THE  DARKLIGHT?! Hurley won the LOTTO? Can they trust that guy who hot-aired balloon onto the island? Are Jack and Locke gonna kill each other? Omigod, that red-bearded dude kidnapped Walt! Now Michael killed everyone! Jack, Kate, and Sawyer, captured by the Others… and the HOT AIR BALLON GUY IS THEIR LEADER?! And they have HOUSES?! They’re on ANOTHER ISLAND?! Jack is going to totally let Ben die on the table! No he isn’t. Sayid is BADASS. Sawyer is AWESOME.

Okay, this can go on. And that’s only, like, the first three seasons. And the stuff that comes LATER is even more mind-blowing. Which all just leads me to say, logically and dispassionately: 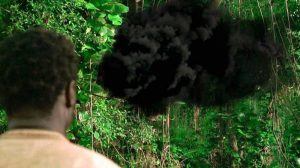 I admit, around Season 3 I got a little worried. People who knew were warning me, the ending doesn’t answer all the questions. I’m a “wrap things up, please” kind of guy, both in my story consumption and in my writing. I like all questions answered as interestingly and creatively as possible, as do many of us. Somewhere in Season 4 or Season 5, though, I realized: that’s not Lost. That isn’t what this show is about. I mean, this started out as a show about people shipwrecked on an island and it’s turned into a show about two warring gods with some of those people stuck in the middle (with almost a dozen permutations in-between Point A and Point Wherever-The-Hell-We-Are-Now) and I’m completely at peace with how we got here. This again leads me to ask: 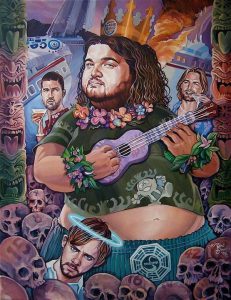 Truth is, I’ve gotten enough answers out of Lost at this point. Enough of the earlier questions that kept me hooked have been sussed out for me. Anything else I get from this point on is gravy. I would have been totally satisfied if the show had ended with the Season 5 finale. But it didn’t. Which means I get MORE Lost goodness with Season 6, and I’m totally okay with that. I’ve already figured something out, you see, and frankly it’s pretty obvious so I’m probably not alone in the following deduction: this isn’t a show about people lost on an island. The title and setting are misleading. The mysteries of the island are secondary. This is a show about the characters, people lost in their lives, a collection of lost souls. They just all happen to be gathered, brought together by the enigmatic forces (thanks, Netflix show description!) of the most badass time-hopping reality-altering island of ALL TIME. Including Krakoa. (Shout out to GSXM #1!)

It is rare that one comes across what I’ve found Lost to be: an indelible story experience, one that sticks with you long after it’s done. (More on those on a future podcast, plug plug.) Most of the time you don’t want those experiences to end. Truth is, though, I can’t wait to be done with Lost. I can’t wait to finally be able to Google it and look it up and Amazon-order books about it and delve into the mythology and philosophy and theories and everything else for months to come. My journey on this island, I think, has just begun.

Good gravy, how are you not watching this show right now?

Tom Hoefner (@TomHoefner on Twitter) is a playwright, theatre director, college professor, and would-be novelist living in Brooklyn with his wife and daughter. He will not be reading the comments section of this post until he is finished watching Lost. For obvious reasons.

Geek Cinema: Confessions of a Terrible Critic I’m a terrible critic. No, it’s true. I am. I’m not just referring to my complete lack of urgency to…

Hey! Lighten up! (It’s only comics.) I don't watch a lot of original run television programming. I direct college theatre, and usually when new TV seasons…

Geek Cinema: OMG SPIDER-MAN! A Review. And now I shall write a squealing-fangirl-talking-about-Twilight style review of The Amazing Spider-Man. “OMIGOD OMIGOD OMIGOD OMIGOD! THAT WAS AMAZING!…