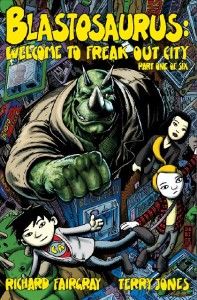 With the first issue fresh on Comixology, Blastosaurus is coming to a larger audience, reaching out further than its beginnings in New Zealand. Reviews have been pouring in, including one on our own blog, and it seems that readers are really loving the tale of a time-traveling, mutated triceratops. With all the new press, co-writer/artist Richard Fairgray was kind enough to chat about Blastosaurus, how unbelievable the Ninja Turtles are, and much more.

Leo Johnson: Tell us a bit about yourself, if you would.

Richard Fairgray: My name is Richard Fairgray and I write and draw comics for a living. I’ve been doing this since I was seven. My first book was called Ghost Ghost and it concerned a little ghost who struggled with invisibility, loneliness and a sense of alienation from society because of his intelligence. Once I started making comics I just never stopped, although I did take a break from publishing them from ages 10-14.

I enjoy the comic medium because I think it is one of the only places where a creator has total control of time and tone and visual storytelling, taking the best aspects of film and literature to tell a really broad range of stories. I’ve tried working in film and on stage but I always come back to comics in the end.

I’m legally blind, I have approximately 3% of the vision a sighted person would have in my right eye and nothing in my left. This might also account for my attraction to the comic form. I don’t really see things in 3d and without two eyes it becomes very difficult to shift focus, the flat canvas of the comic page works nicely as a way for me to construct an understandable world for myself.

LJ: What’s the elevator pitch for Blastosaurus, for those who haven’t read it?

RF: My workers at conventions mock me for this but I’ve become very specific in the way I sell the book, so, to quote their impressions of me:

‘Blastosaurus is like the serious grown up version of all the cartoons you loved as a kid. Did…did it ever bother you that the Ninja Turtles could put on a hat and no-one noticed they were Turtles anymore…or that Robocop could sneak up on bad guys even though his normal step made a (insert bad impression of robot sound here)? Well, even as a three year old this brought me out of the reality, so I always wanted to create the mutant crime fighter who lived by the rules of the real world. Yes, Blastosaurus is a 6’ tall mutant triceratops cop with a ray gun from the future but really that isn’t an advantage, he can’t go undercover, he can’t fit in a police car and he has to get his pants specially made. He still fights evil mutant raptors and killer robots and there’s time travel and everything else you want from this kind of story but at the heart of it he’s a curmudgeonly old man who wishes he wasn’t shaped like a dinosaur.’ 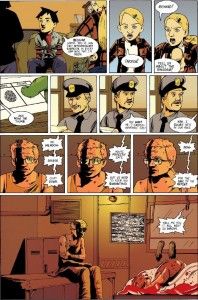 I think that sums up pretty well what I like most about Blastosaurus as a character. I actually do a spin off series about his really mundane adventures where he tries to order custom shaped shoes or learns to make good tea through trial and error.

LJ: How did the idea of Blastosaurus originally come to be?

RF: He was a joke in another comic, a fake ad for a 90s style cartoon. It wasn’t until several months (maybe even a year) later that I revisited him and realized he could be a serious character, or at least a layered and multi faceted character in his own right. I did have to change his name from Gunasaurus for this to work.

LJ: Blastosaurus #1 is already on Comixology via Comixology Submit. What was that process like and have you seen any results in the already short time it’s been available on the platform?

RF: We’ve had a really positive response so far, people seem to enjoy the idea and the book, it’s a very dense read and I think people like a comic with a heavy amount of story in it.

It’s impossible to know at this stage if this attention has turned into sales but given how many people have been emailing me about it I am feeling pretty good this week.

LJ: From what I can tell, Blastosaurus started as a webcomic. How has it been taking it too print and then back to digital with Comixology?

RF: Blasto was actually in print first, the problem is I live on a tiny island on the bottom of the world so the logistics of distributing beyond a national level with a print edition are overwhelming. The title began as a series of convention specials, then the ongoing series saw the light of day back in 2011, just before it started online. I think the comiXology version of it is a really great way for the book to be read because it mimics the reading experience of an actual book so much better than scrolling through a website. 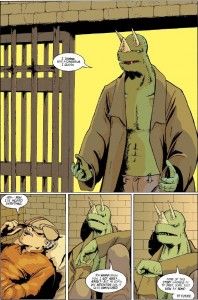 Also through comixology we can increase our output to monthly which I always wanted to do.

LJ: Blastosaurus takes place in the past, present, and future. Is it ever a challenge to keep it all straight as you write and draw, jumping from various periods?

RF: Fortunately for me that was only for the beginning of the origin story, we needed a way to tell the story that wouldn’t stop the main characters from being introduced until issue 3 or 4. Right from the beginning of the story we let the readers know that this is all leading to Blastosaurus arriving in the present and (somehow) ending up in prison. By telling his story from three different perspectives we get to keep all of the important beats while still maintaining a sense of mystery and intrigue (I hope).

LJ: Comixology is a huge marketplace. What about Blastosaurus are you hoping will help it stand out from the crowd?

RF: With any independent comic that is a challenge. You put it out in the world and hope people notice word of mouth, press releases, shouting from rooftops if you have to, that’s all we have. It’s so hard to compete in a market where so many people are drawn to what they already know, but I think there’s no better place to be than on comiXology because you have the most chance of being seen.

LJ: Where can those interested keep up with you and your projects?

RF: Blastosaurus.com, the Blastosaurus Facebook page, @blastosaurus on Twitter. I’m the only Richard Fairgray in the world (as far as I know) so I’m pretty easy to find.

RF: I’ve probably said enough. If people are still reading and not hating me then they should probably check out Blastosaurus.

Be sure to pick up Blastosaurus #1 on Comixology for just $1.99.

Tim Gibson Talks Moth City – On Sale at ComiXology Feb When Comixology Submit first began last year, indie creators everywhere finally had a chance to get their comics in front…