I’ve had the esteemed privilege of interviewing S. Steven Struble, the writer and creator of the much beloved series Li’l Depressed Boy. LDB Volume 1: She is Staggering has sold out and is on it’s way to a second printing! Struble will be making a trek through the Midwest promoting the book, and taking time out for his fans to sign some copies and shake some hands at several local comic book shops. A few of those stops will include some notable stores in Struble’s (and mine) home state of Kansas! If you happen to be in the Sunflower State, make time to pay him a visit at Astrokitty Comics in Lawrence, KS on March 22nd or Prairie Dog Comics in Wichita, KS on March 23rd!

SMC: We have our mutual friends at Prairie Dog Comics in Wichita, KS to thank for this interview. What’s your connection to the area?

SS: I was born in Ark City, went to high school in Hutchinson and spent most of my early life within an hour or two of Wichita. I used to drive up there all the time to see concerts and visit family. Despite having spent the last decade or so in Texas, I still consider myself a Kansan before anything else.

SMC: What kind of role do you feel the LCS plays for indie creators, and do you think that role is big enough?

SS: A good comic shop makes the world of difference. There are certain things that digital stores will never be able to replace: the knowledge base of the employees, the ability to find something by accident, people who know you when you walk in — not just a tracking cookie on Amazon. Without local comic shops, I think the landscape of the comic industry would be drastically different. Would there be indies? Yeah. Would they be as well supported? Not likely. 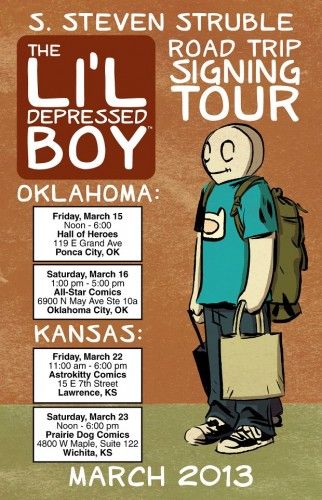 SMC: What has the LCS community done for you specifically?

SS: Comic shops have been really helpful to me. For instance, during my early days as just a reader, store employees would recommend books to me and helped guide me from the initial interests of superheroes to a broader set of tastes that helped me see the medium as something more than a single genre.

In my self-publishing days, before I had a distributor or anything, I would stop by every shop in any town I would visit to ask if they would stock my book. Shops would be kind to me and carry a couple copies of my book, because I asked them nicely.

Nowadays, Comic Shops have been super kind in carrying the Li’l Depressed Boy — even if I haven’t been walking into their shops and delivering the book, myself. I’ve heard so many stories of people discovering the book from a store employee putting a copy of the book in their hand and telling them they’d love it. It’s nice to see that come full circle.

SMC:  How did LDB find it’s way to Image Comics? Tell us a little about that process.

SS: I started doing the Li’l Depressed Boy as a webcomic, which I did off-and-on for about 13 years — starting 15 years ago, when I was I was still at Hutch High. It went through several permutations: A three panel strip drawn by myself, then an anthology strip with a rotating cast of artists, eventually becoming a linear story formatted as a standard comic page with Sina Grace taking on full-time art duties.

When we made that last change, the scripts went from one-page moments to a full length comic story. Once we made it to the end of the first chapter, we printed up what we now call our “demo tape” — a version of issue number one that we did at a short-run printer. Then we brought them to the Comic-Con International in San Diego to give to publishers.

Sina gave a copy to Eric Stephenson at Image, and he expressed interest in Image taking it on. It’s been our home ever since.

SMC: Where did you get the idea for LDB?

SS: LDB originated as a doodle on the back of an old math paper. A simple rag doll character that I could draw with my limited art skills. I would doodle him everywhere for years and gave him an old nickname I was taunted with as a kid.

When I wanted to work through some stuff I was dealing with in real life, I couldn’t think of a better stand-in for me than the rag doll with my childhood nickname. 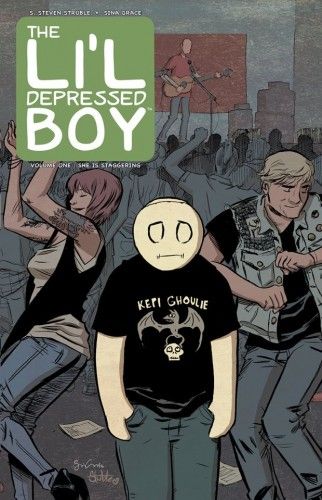 SMC: Does LDB reflect any of your own personality or experiences?

SS: Indeed. He does. I don’t really try too hard to hide the fact that these stories are autobiographical. I play with the order of events and composite people and places, but for the most part this is all stuff I’ve dealt with in my life. Despite the title, the book is the story of my search for happiness and contentment.

SMC: Sina Grace has been your artist on the series. How did you come to choose him as your artist?

SS: I met Sina through our mutual friend Nicholas Brandt. Sina was starting his self-published comic Books With Pictures, and needed a colorist for the covers. Nick knew me through Livejournal, and knew I colored comics so he made the introduction. I fell in love with his art and asked him to help out during the anthology-era of the web comic.

At the same time I was thinking about changing the format, Sina asked if he could draw a longer story. The original idea was that I was going to keep the anthology format, but have the artist switch after each storyline. Then Sina turned in the pages, and I loved them. It was such a perfect fit for the tone of the story. I immediately rethought the idea and asked him to take on full-time art duties on the strip.

SMC: Who’s idea was it to give LDB his unique look. What’s the idea behind that?

SS: LDB’s look is purely based on my lack of drawing skills. Just a simple a circle, with two rounded tear-shaped eyes and a mouth with four stitches in it. Anybody can draw it. Heck, he even has mitten-hands so that you don’t have to worry about drawing fingers.

SMC: How far do you intend to take LDB?

SS: The story doesn’t end until LDB is happy. When he’s achieved that, I think he has earned a break from our watchful eyes.

SMC: LDB is a comic and music fan in the book. Do you think he has a favorite of either? What about you?

SS: Like most fans of those mediums, it’s really hard for LDB and I to pick out definitive favorites. It usually becomes more a list of favorites. But thankfully LDB and I’s tastes are the same.

For comics, The Walking Dead, Peter Panzerfaust, Reed Gunther, Hoax Hunters, all the Green Lantern books, and anything by the the Hernandez brothers, Chris Ware, Adrian Tomine or Daniel Clowes. 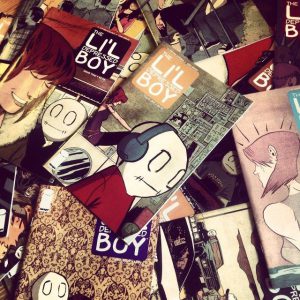 Music: Andrew Jackson Jihad, Devo, Mike Park (and any of those hundred bands he’s been in), Lemuria, Childish Gambino, and Paul Baribeau. I also got this seven inch “Get Out” by an Arizona band named Dogbreth, which I’ve been wearing the grooves thin from listening to all the time.

Oh. I can’t forget O’phil, who was one of those bands I used to drive up to Wichita to see all the time.

SMC: Do you have other projects in the works? What can you tell us about those?

SS: I’ve a few projects bubbling in the back of my head, that aren’t quite ready for the light of day. Right now, I’m currently working my hardest to get LDB back on track so I can get moving forward on on those.

Also, Sina and I recently did a couple things for Boom’s Adventure Time and Regular Show books that I’m really proud of. Sina drew the art, while I provided the colors. (Coloring will always be my first love).

SMC: After your signing at Prairie Dog Comics, where else can you be found? Have any plans for con season?

SS: Sure do. I will be at c2e2 in Chicago in April, as well as Derby City Comic Con in Kentucky in June. I’m currently trying to figure out if I can make San Diego Comic-Con in July, but I’m really hoping I won’t miss it.

Other than that, I can be found on the Internet thanking everyone who reads the book. @Struble on Twitter and lildepressedboy.tumblr.com.

SMC: Thanks a lot for taking the time to visit with me and for being on StashMyComics.com!

Geek On A Budget: July 2011 Do you want some fee comic books? Would you like to know how you can get some free comics? Would…