Sometimes, all it takes is a comic book to point you in the right direction. It’s weird, I know, but it happens. I think that comic writers are some of the most passionate fans that this industry has to offer. Not in the sense that they write these wonderful stories that we enjoy on a monthly, or in Marvel’s case, a weekly basis, but in the sense that they write that one issue that really resonates with someone. It doesn’t really matter what that particular issue is about, so long as it has that lasting impression on it’s reader. What they take away from it, and the power it has over that person, really can make an issue special. I’m getting ahead of myself. Let’s focus on why we’re really here, shall we? Sit down with me as we review Batman #18.

If you haven’t read Batman Incorporated #8 by now, stop reading this and go find a copy. Caught up? Great. Let’s move on. Since Harper’s last encounter with Batman in the sewers of Gotham, she’s been tracking him. He’s told her in no uncertain terms to stop, but she has a real hard time listening to what people tell her to do. Over the past few months, she’s gotten pretty familiar with Bats. Find the criminals, beat up said criminals, sometimes beat up a bigger part of his rogues gallery, wash, rinse, repeat. The past few nights though… the past few nights have been different. He’s acting differently. Not entirely out of the ordinarly, but drilled, pushed, and excessively aggressive with his work. He’s lacking focus and going more on blind rage. He’s even working in the daytime now. Something’s happened to him.

I’ve said it before, and I’ll say it many more times I’m sure: Scott Snyder is writing some of the BEST Batman stories we will ever read. The scenes are 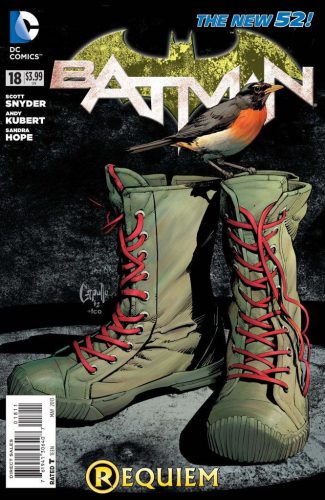 set perfectly, the action flows, the drama and heartache can be felt. For 28 pages of story, you are captivated. You are held fast. You won’t let go. We are seeing a side of Batman, and even Bruce Wayne, that rarely gets to see a comics page. To me, he’s not put up on this pedestal that holds him above me to worship. No, I can see just how human he really is, and how much pain he’s in. Snyder’s ability to bring the human element to a Batman story has been shown before, but here, it’s magical. I feel for Bruce, and hurt alongside Bruce… I grieve with him.

Andy Kubert’s pencils for Chapter One, along with Alex Maleev’s for Chapter Two keep you just as much as the script for this issue does. When the action is pouring over the pages, holding you with each panel, making you sweat with the turn of each page… It’s intense. When it all settles down in Chapter Two, and we’re allowed to catch our breath, Maleev’s sketchy artwork actually fits. At first, I was disappointed in the shift of pencils, but as I read, I found myself loving it more and more. It’s supposed to be like this, visually, to take you from that adrenaline fueled peak, down to this softer tone, to perfectly match the end. What Harper shows Batman at the end is also meant for us. Harper knows, she can see it the Dark Knight. Sometimes it takes an outside perspective to bring it all around, and this time, Batman really takes the time to listen. Maleev’s pencils in this part of the story are expert. It couldn’t have been shown to us any other way.

This issue hit home with me. Like Batman, I lost someone close to me. No, it wasn’t a son. It was my brother. Batman has lost people before. Jason Todd for one, his parents, and others along the way. Each time, it’s never been personal with me. This issue, however, in the words that Snyder put to paper, hit home. As I read Harper explaining to Batman the grief and pain she sees eating away at him, it hit me. I was feeling the same thing, the same way, with the exception of beating up bad guys. Where the Dark Knight gets to let his anger and frustration out on evil doers, mine was through tears and holes in the wall. Where Batman’s depression led him to the dark alleys of Gotham, mine took me to crying in my van, screaming to God asking why my brother, of all people, had to be taken away. It’s funny though, in a way. Harper saw this in Batman, and though Batman gave her one helluva beating during her first confrontation with him about this, she didn’t stop. As the issue progresses, it comes down to one word, and it’s a word that Bruce Wayne, more that Batman, needs to hear. As we hear Harper lay it all down for Bats, as we here him on the rare occasion say he’s sorry, as we stand there with him to see that message on Wayne Tower that is meant soley for him, we see it.

That’s where it resonates. That’s where it connects. That’s what makes this issue such a damn good read. It had me in tears. It had me thinking about just how much pain and hurt I’ve been through, and put myself through these past few years since I lost my brother. It was the outside view that I needed, to help me to resolve.

Thanks Scott. You don’t know it, unless you read this review, but you’ve helped me. The medium that I love so much, that I focus so hard on, pointed me in the right direction. Sometimes, that’s all it takes.

Editorial: …But I’m Still Not A Fan In my last StashMyComics.com article, I wrote about how the Batman: Arkham Asylum video game made me care about the Batman universe…

Sneek Peek – Batman and Robin #1 Battling evil with his own son, Damian, at his side, Batman now realizes that the hardest part of the job…