One comic book company that really should have stuck around was Valiant.  It had everything!  Wild characters, great stories and art, and a bunch of creative people that really wanted to make a universe work.  For a while it did. But as with all good things somebody gets it dirty and then it stops working and then it’s not taken care of any longer.  That’s for another review, but for now let’s focus on one character’s series that became rather popular.  Turok, Dinosaur Hunter!

I’m sure we’ve all played the games on the Nintendo 64.  Gotta love those first person shooters.  Before all that though, Turok was one of Valiant’s mainstay titles.  Widely popular, Turok took readers on a fantastic journey through the jungle in search of, what else?  Dinosaurs! As with all #1 issues, this one lays the ground work for all future Turok stories to follow.  The plot is as follows: Turok is stranded in a time that is not his own.  Here, he is on the hunt for a technologically modified Velociraptor named Mon-ark.  While he tracks his enemy down, Turok must remember his past, which it seems is doomed to repeat itself if he’s not careful. 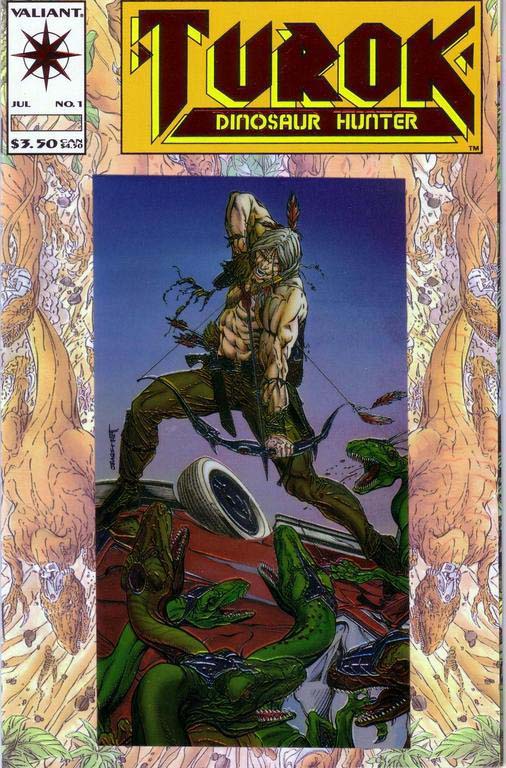 David Micheline wrote a fairly decent story.  It’s definitely filled with lots of action and I really like the attention to Native American detail he put into this.  If David hadn’t done his research this issue would have suffered greatly, but because he took the time to get it right which made the issue all the better. Coming into this issue with no knowledge of Turok’s history before this, he does a really good job of bringing you up to speed.  The first six pages alone are dedicated to back story which fills us in on why Turok is hunting Dinosaurs anyway.  It really didn’t go much into Mon-ark (I think that is really clever, by the way) but I’m sure that is all revealed in later issues.  The tone of the book feels good and for the most part I felt satisfied and wanted to read another.  He does a good job of getting the reader caught up fairly quickly to where Turok is now but I felt it kind of skipped over some things a little bit. If he would have stayed on track a little more, maybe gone just a bit more in depth, it would have made for a better issue.

Bart Spears does great pencils here.  The cover alone is fantastic but the inside art is visually appealing too.  Valiant artists, at least to me looked stiff, but here it doesn’t feel that way.  Bart draws very smoothly and it seems that there is just enough to keep you scanning each panel.  The colors and inks definitely add to the feel and emotion of the script which sets the mood for a story like this.

With Turok Dinosaur Hunter, we are thrown right into the middle of a blood lust hunt filled with revenge.  Do we dare to follow our hero as he continues on his quest?  I can honestly say that after reading this issue that I can say Yes.  Lead on Turok!

Back Issue Bin to the Future: Shadowman #1 With Valiant's triumphant return to comics this year, it only seems right to lend a section of Back Issue Bin…