If you keep up with the small issue reviews I do and the Chase Variant Podcast you will know that Flash has been my favorite comic to come out of DC with the New 52.  I even co-conducted an interview with co-writer and colorist Brian Buccellato, which only got me more invested in this title. I know find myself checking for things that were discussed.

Now I by no means consider myself a Flash expert but you certainly do not need to be one to enjoy the stories that are being put out.  So with Flash becoming even more powerful, some may say the most powerful, in the New 52 how do you keep the story interesting?  You make his villains even stronger, and so far, Flash is really being tested. 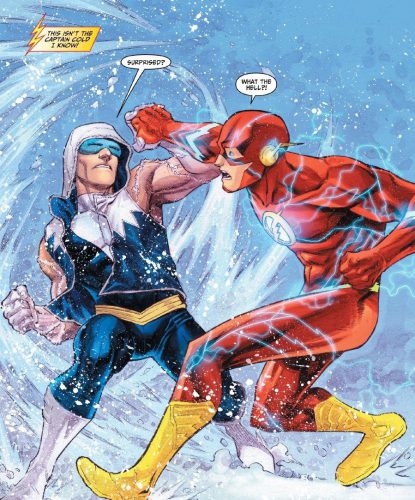 We start this issue with The Flash giving us a little backstory on Captain Cold when it starts the fight between the two.  Captain Cold is new and improved and even Flash seems surprised at the change. Cut to the prior day where you get a little insight to the “normal” life of Barry and Flash gets some new tech that should prove to be very interesting.  Things cut back and forth a few times while Flash and Captain Cold fight and you get some insight into Captain Cold’s motives.

The writing is keeping things open for new readers while still moving things along at a good speed.  This issue offers plenty for those that like to quick read to get the basic story as well as for those readers that like those more subtle subplots. Although I highly recommend reading slowly and letting the art sink into your mind.

The art is still as strong as it has been and there seems to be nothing about it that I want to criticize, which is rare for me.  I like the new design for Captain Cold, it keeps it traditional while still modern and fitting with his new powers.  One of my favorite parts of this book is the blue energy lines on Flash when he is fighting Captain Cold.  It may not seem important but I think small details like that are awesome.

Captain Cold definitely seems like the kind of villain I could root for.  I know that may sound strange, but I like the fact that he will not let anything get in his way yet he maintains a strong code of honor and loyalty. Then Flash is showing signs that he may not be as powerful as he appeared to be in the first arc.  With this issue, The Flash remains at the top of my New 52 list.  This episode is a good point for readers who have not picked up Flash yet and are looking to get hooked.