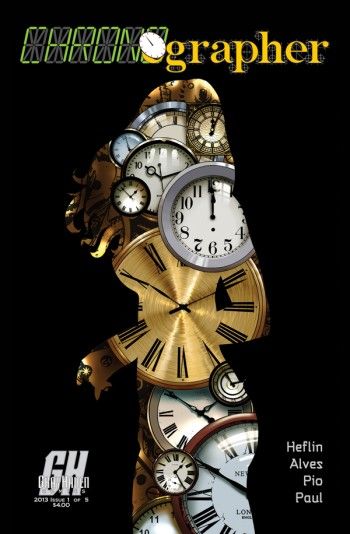 It can be a struggle at times to find comics created by strong female writers. The big two have gathered together many great talents, however, in the larger pool, female writers are still greatly outnumbered.

Enter the independent comic market. From Kickstarter to smaller publishers, there are opportunities abound for female creators to get their work published. The question however, is have you noticed?

If not, let The Fangirl Concern begin to introduce you to some of these great creators.

This week’s featured writer is Erica Heflin. Heflin has made headlines lately for her unique Kickstarter book Flesh of White that was successfully funded. However, you can already read her work through publisher Grayhaven Comics.

Out now is the first issue of Heflin’s series CHRONOgrapher. The black and white comic, not only has a beautiful and unique cover, but a lost in time story with a twist.

This first issue is told in three chapters, with three characters, supposedly completely unconnected. However, it becomes clear that something larger is at work and happening to them.

It is clear that there are two characters at odds with each other in each story that plays out throughout the book. However, questions and mysteries are left open to be answered in future issues. Each of the three sections of the book are illustrated by different artists, creating a unique feel for each time period shown. The puzzle pieces do not completely come together, of how these different acts of violence are connected, until the final vignette of this issue.

Heflin creates a complex plot that is not hard to follow or accept. Toward then end you may have to reread dialogue boxes to understand who is talking, however the confusion of the characters in their own situation can be felt and tugs at your emotions.

In a reply via Twitter, Heflin says that issue two is expected sometime in May, with art currently in the finishing process.

The Fangirl Concern: Betty Ross – Why Fans Should Go… If you feel like you need a strong female character fix every week, and struggle to wait until the end…